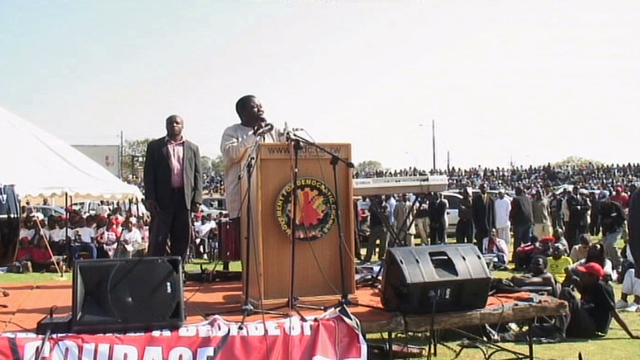 Twelve months after his appointment as Prime Minister, Morgan Tsvangirai and Robert Mugabe remain locked in conflict. Behind fledgling signs of recovery, Mugabe still appears able to hold his partners at arms length.

As many returning exiles have found out, it is still almost impossible to find a job. "You can't create jobs in six months", Mr Tsvangirai admits. "We need assistance, but we can't force [the international community] to give it to us." Indeed, many Western nations are unwilling to lift sanctions as long as Mugabe remains in power. And although he is unwilling to openly blame the President, Mr Tsvangirai can't conceal his frustration: "He says he will look into this, look into that. And to me it is not satisfactory because it's procrastination". But Mugabe's lieutenant, D. Mutsasa is keen to remind us who's the boss: "Tsvangirai takes his orders from the President". Any suggestion that the two men should share power equally is dismissed as 'fanciful'. As for the dire state of the economy, Mutsasa is also quick to place the blame elsewhere: "One chief cause has been the sanctions that were exposed against us by colonial countries". After thirty years, it seems that Mugabe's iron grip hasn't loosened at all.
FULL SYNOPSIS
TRANSCRIPT