Zoo Business: the search for the missing wild dogs

The Search for the Missing Wild Dogs 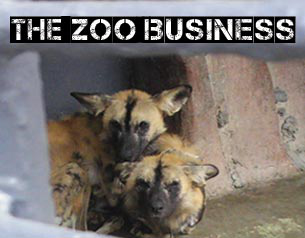 This investigative documentary reveals the hidden trade in Africa's rare wild hunting dogs. It's a trade that was denied by the people meant to protect them. A trade that stretches from the dogs homeland in Africa, to China, Czechoslovakia and America. Most disturbingly, the trade involves Zoos worldwide.

"I've bred African Wild Dogs for the last 10 years", says Manus Pretorius, "I deliver to Dalian Zoo in China. I've delivered to Canada". Not only does the trader admit to be dealing with wild dogs, but his contacts in China are equally open about their 'exotic' imports. "We transported them from South Africa to Changsa, says one Zoo Keeper, "20 dogs for $80,000" says another zoo keeper in Dalian. Everywhere you go in China, from Beijing to Urumchi giant zoo advertisements bear the wild dogs' distinctive face. In the zoos we find the wild dogs cowering in cramped conditions, jeered at by kids who come up close to the cage. None of the zoos are members of the World Association of Zoos and Aquariums and conditions for all of the animals are shocking. "I send dogs all over the world. I send dogs, giraffes, elephants, lions", says one of the many South African dealers. Since trade in dogs bred in captivity is legal, you can find dog dealers advertising on the internet. But mixing captive bred animals with wild dogs obtained from the wild is becoming more and more common. Those in power are beginning to accept the problem. "We were unaware of trading being a significant issue in wild dog conservation", explains Dr Claudio Sillero, "but in the light of what I've seen, I personally don't think we should be capturing and removing any wild dogs from the wild". For Greg Rasmussen, the answer to the problem is now clear: "the international trade certainly is affecting the wild population, and that should be enough reason for the European Commission, and protecting institutes, to list the African Wild Dog on CITES". This investigation was four years in the making. LEARN MORE.
JOIN THE DISCUSSION.
FULL SYNOPSIS