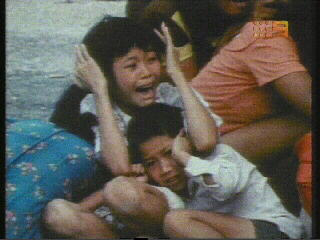 Army corruption, vigilante violence and police brutality have become the norm for Cambodia. Life after the Khmer Rouge has not been as peaceful as hoped.

In Phnom Penh, a man lies bleeding in the street. It appears somebody drove past and threw a grenade into a cafe. Nobody knows why it happened. Businessmen make the most of the chaos. Victor Chau’s popular nightspot is an unashamed showcase of international gangsterism. A scuffle erupts between his clientele and Victor orders the army in. Only in today’s Phnom Penh could Victor’s vigilantes get away with standing over troops. The reason is simple - he’s paying off the bosses. Outside the capital, at what should be a happy wedding day, the bride’s mother is lost in grief. “My husband was so cruelly killed – eyes were gouged out, his legs tortured. He must have suffered a lot before he died.” Later, she was paid a visit by the local commune chief. Instead of commiserating, he simply said her husband’s opposition party membership was a betrayal of Hun Sen, thus deeming his death to be self-inflicted and therefore “suicide”. While political killers roam free, prisons are crowded with petty criminals. Guilty or not, all have confessed because of the brutal police torture. In the midst of the violence Hun Sen’s political opponents talk with optimism. In a lengthy interview, the Paris accountant turned political strongman, Sam Rainsy hopes for change. “Justice comes with democracy, and democracy can only prevail if you promote the truth. When we expose the truth…we can ensure justice.” Cambodians waits to see if their justice will be served. Produced by ABC Australia
FULL SYNOPSIS
TRANSCRIPT