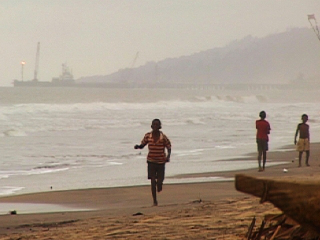 Following the attack on the Togo football team, we offer a short profile of what it's like to be a civilian living amidst the guerrilla war outside the huge oil facilities that dominate the enclave.

Cabinda produces most of Angola's oil yet its people see very little of the wealth. Now Cabinda's people will almost certainly be punished terribly. Following a previous attack, the army came to one village, "A single soldier worked his way along the line of civilians. The first 3 were killed instantly, the last 3 were shot as they got up to run".
FULL SYNOPSIS
TRANSCRIPT