What does the World Cup really mean for South Africans? 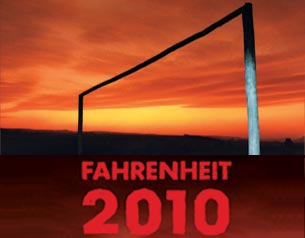 This uncompromising investigation asks what the World Cup really means for South Africans. Who actually stands to benefit from the millions of dollars invested? And what will South Africa be left with after the trophy is lifted and the applause dies down?

"The 2010 World Cup will be held in South Africa!" - the announcement was received with deafening peals of applause. Promises were made that "the people would reap the rewards". And the publicity machine went into overdrive. "Fifa expects to make $25 billion out of the television rights alone." Advertising space was sold off to VISA, Budweiser, Telkom and countless others...and giant white elephants sprouted up all over South Africa. "A world full of greed, self-interest and self-promotion", had arrived. "South Africans are passionate about football. This will be a very noisy world cup". Not only are South Africans willing to work on the stadiums for a pittance, but most of the South African fans won't be able to see the football at all. "Fifa said we can't have stadiums near shacks, we can't show the world this kind of poverty." So construction began in Cape Town's Green Point rather than the more popular choice, Athlone. In Durban a giant 70 000 capacity stadium was erected right next to an existing stadium, justified by the 'coming Olympics', which South Africa also hopes to host. Even Archbishop Desmond Tutu says that "it's well worth the price".

"People have to understand that the commitment of resources to 2010 will be half of the commitment of resources to the Olympics", says Dennis Brutus. And those in power will let nothing stand in their way. "We know we're going to be evicted but we don't know where to", says a member of the Mbombela municipality where a new stadium is being constructed. A school was demolished for construction offices and the pupils moved into boiling hot caravans. "I've got a criminal record because of this stadium. This stadium hurts me a lot", says a boy who protested about his new 'classroom'. "Kids dream about becoming footballers, they don't dream about going to hospital", says the CEO of the local organising committee. Yet for many South African children, the World Cup dream has already begun to fade. The glory of national pride can't hide the fact that South Africa is still suffering from more health, educational and poverty crises than ever before. And when the applause dies down, South Africans are going to have big questions about how their resources have helped them. "We've been seduced", says Martin Welz, "this was a big mistake." LEARN MORE.
WATCH MORE.
JOIN THE DISCUSSION. 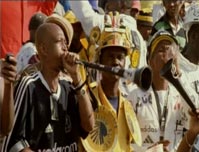 "On the road, as we travelled from city to city, and town to town, speaking to people, the film's central theme came into focus. Why would a country with daunting socio-economic challenges, choose to spend its limited resources on building the world's most modern sports arenas? This question (and the film itself) does not suggest that South Africa should not be hosting the World Cup. It concerns why a Third World country, which will be providing the facilities for FIFA to make more money than it has ever made from a single tournament, should not have used its existing stadiums - as it did when it staged World Cups in Rugby and Cricket, and the FIFA Confederations Cup in 2009 - and staged the event in a manner more in keeping with the country's actual circumstances and capacity."