Out Of The Shadows 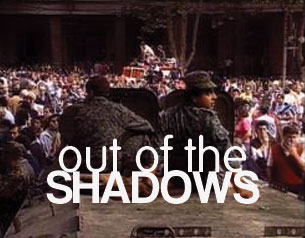 In 1991, soviet communist leaders declared that democracy had arrived and the world breathed a sigh of relief. But as the statue of the founder of the KGB fell, the KGB did not go down with it. For Georgia, the battle for independence was not over.

Georgian independence was being called for before the Soviet Union broke up. In a terrible incident in April 1989, at a demonstration for independence consisting of mostly women, Soviet troops opened fire and many were killed. For other Soviet satellite states, the battle to break away and move to independence had been relatively peaceful, but Georgia's story is one of violence and bloodshed. Out of the Shadows documents the early days of Georgia's independence, which became defined by shooting, torture and political repression. We meet members of the Mkhedrioni, or 'Horsemen', a particularly violent nationalist group which resurfaced and became instrumental in the savagery that came to define the political atmosphere. They were close allies of Shevardnadze, who was accepted into Georgia's government in 1992 following the coup. The West described Shevardnadze as a democrat and incorruptible, but in his parliament, and on Georgia's streets, the Mkhedrioni had become the nasty face of his security apparatus. During this time, at least 50 attacks took place on unarmed civilians who were protesting the overthrow of the government. One woman explains, "We did not believe they would shoot unarmed people, their own people," but the Horseman were equipped with a total disregard for human life, not hesitating to beat an elderly woman or shoot an unarmed young boy. An ad in the paper reveals the violence faced by the Georgian people: "Warning. All unauthorized rallies will be dispersed. Anybody who shows resistance will get a bullet - Jabba Ioselani, The First Deputy Chairman of the State Council of the Republic of the Georgian State Council." Shevardnadze was determined to bring the breakaway regions of Abkhazia and Ossetia back in to Georgia. Georgia's fallen leader Gamsakhurdia had gone there to prepare for his comeback and Russian influence and support for the rebellious provinces irritated Shevardnadze. The bloodshed that was spilled as he first attempted to militarily achieve his objective and then when that failed, by clandestine means, forms the backbone of this documentary. Was Shevardnadze, the darling of the West, in fact no better than the most brutal of local warlords?
FULL SYNOPSIS