A look at the devastation caused by tsunamis around the Pacific. 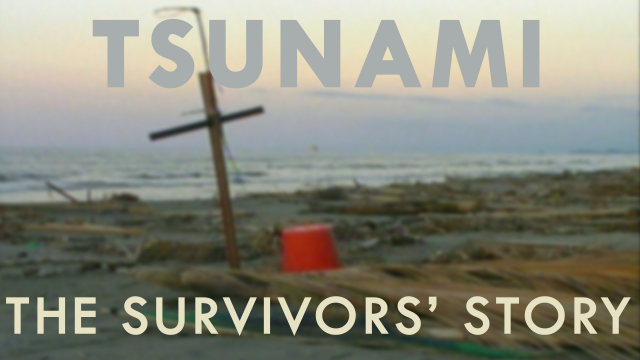 As aid starts flooding into Asia, some victims of Sunday's Tsunami are already starting to question their future. Where will they live now? How will they rebuild their lives? It's a problem that has faced many of these people before. In 1998 a powerful tidal wave killed thousands in Papua New Guinea. A week later, an ABC crew followed survivors as they returned to their destroyed village to rebuild their community. Their story makes for pertinent and timely viewing.

After the tsunami in Papua New Guinea the survivors are trying to decide the destiny of the Warupu people. As a fishing community, they harvested the richness of the sea. A sea that sustained them and then destroyed them. For 2-3 minutes the waves tore through their villages and tumbled them underwater - a cauldron of bodies, houses, boats and trees. "When the sea ran out there wasn''t a house left...no living soul." Night fell only 20 minutes after the tsunami struck. On a moonless night their only guide was the calls of the injured and dying. Every family has lost someone. Yet there are no orphan's' tents in this camp - everybody belongs to somebody - an uncle, a cousin, a sister. The surviving elders of the villages are trying to keep their people together by establishing a new village. But the only Warupu land is next to the beach and most are too afraid to return. For now their neighbours, the Ramo, are letting them stay in a small area of bushland. But it' is not an easy relationship. The Ramo believe the Warupu are arbiters of the own destruction for clinging to their old customs and not converting to Christianity. But the Ramo land seems the only safe choice. Yet after a trip to assess the wreckage, the elders are wavering. Within 15 minutes of having their feet back on the sand their decision to stay on Ramo land seems wrong. "We are people of the paddle. Just because the sea hits you, you can't let go of the paddle... it''s wrong." Produced by ABC Australia
FULL SYNOPSIS
TRANSCRIPT