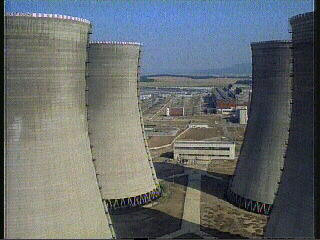 The Austrian/Slovakian border has become the environmental frontline where East meets West in a fight for green priorities.

Still suffering from the aftermath of Chernobyl, Austrians are not prepared to put up with a new nuclear power plant in neighbouring Slovakia. But for the Slovak’s, the Mochovce nuclear reactor is their ticket to a nation abundant in cheap electricity. They’re not about to give-in to their richer neighbour’s demands. Yet even Slovakian experts are not sure about the station’s safety. Built to an ageing Russian design and located in an earthquake zone few are convinced that the plant is as safe as it should be. In Slovakia though, internal debate is low-key. State-owned TV does not have much air-time for views that undermine the government’s most expensive investment. Austrian politics has become dominated by the Mochovce issue. The anti-nuclear stance plays well here in a nation that actually built a state-of-the-art reactor but never opened it following a national referendum. At the moment it’s complete stalemate: Austria can threaten. Slovakia can defy. But with enhanced political clout Austria has Mochovce firmly on the agenda during their EU presidency. Produced by ABC Australia
FULL SYNOPSIS
TRANSCRIPT