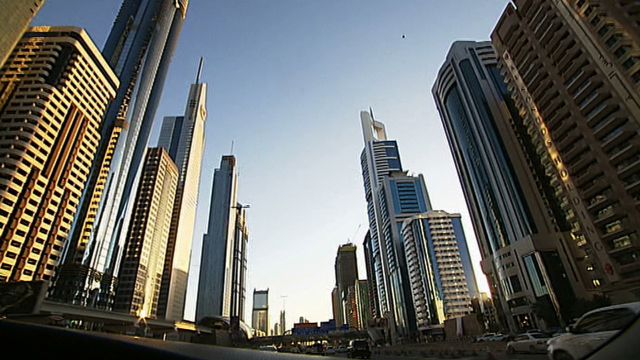 They imagined a breathtaking future-world, and thousands flocked to Dubai to summon it out of the sand. But when the sands of fortune shifted, many found themselves trapped in an archaic and corrupt legal system.

As the spire was fixed to the world's tallest building, celebration lit up the skies of Dubai. Yet for many, the building was the height of Dubai's folly, giving a panoramic view of the empty desert and abandoned building sites below. "We should have had a more regulated market. Too many speculators, too many cowboys", admits Rashid Al Habtoor. Yet with a string of successful hotels, Rashid is hardly one of the losers of Dubai's sudden crash. It was foreign investors such as Herve Jaubert who suddenly found themselves up against an unforgiving justice system: "they put you in jail until you pay what they want". With the support of the police, the powerful doled out their own punishment. Video evidence of one Sheik filling a debtors mouth with sand and firing at him, was dismissed in the courts as 'fabrication'. And for the poor construction workers who flocked from South Asia, justice was even more remote. Their employers refused to pay them, took their passports and demanded that they buy them back. "The justice system in Abu Dhabi and in the UAE is truly a joke", says Anthony Buzbee.
FULL SYNOPSIS
TRANSCRIPT