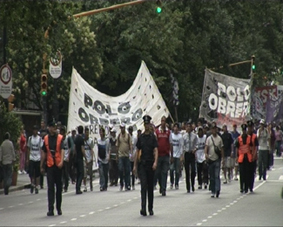 What was once a small band of protestors has now developed into a well-organised movement in the fight against poverty and unemployment. Today, Piquetes are common occurrence across Argentina.

The Piqueteros' street protests are an increasingly common method of tackling social injustice. Although their plight is generally seen as a just cause, many ordinary people find it difficult to live with the disruption caused by regular protests. Despite this, the Piqueteros remain determined to bring about social change. "The reality is that, here in Argentina, some people don't have enough to eat. There are people who are starving to death."
FULL SYNOPSIS
TRANSCRIPT