The people decorating their bodies as a statement 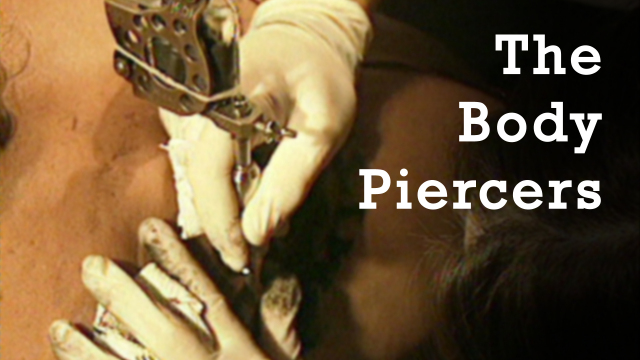 As an expression of urban feeling at the end of the millennium the body piercers are emerging everywhere. Dismissed by many as social misfits, their pierces and tattoos supposedly mark them out as drug addicts and lazy youth. But this is a social movement. Anarchy as mission statement. Body piercing as uniform.

Lurking in the heart of Lisbon's sleepy suburbs is a crucible for anarchy. Behind the classy façade of this town house there are a bunch of people looking for an alternative to the 9 to 5, the mortgage and the kids. It's a mixed bag. Paulo and Joanna are here because they got into debt: a normal life turned sour. They're trying to spruce the Place up. In the courtyard there's Rat. An ageing alcoholic, he just doesn't get it. Why would people live in a house with no running water when they could do better? He's happy though, they let him stay in the house with all his bad habits. After all anarchists have to live and let live... Miguel is starting a revolution. "I look at people, at the bourgeoisie, and their stuff is no good. They are slaves of everything they have, they have to maintain all the shit that surrounds them, the little car, the house in the nice area...they have to feed all of it, all those vices". Through his music he wants to turn people against the consumer culture that binds them. Railing about MacDonalds is just the beginning! All proud to be 'alternative' they relish their own conventions. Body piercing, being in a band and anything arty and expressive are de riguer. Donning his rubber gloves Carolas, another squat regular, shows us his art. Today it's tongue piercing followed by a scrotum pierce for his friend. For him pierces mark him out as a non-conformist. US piercing guru Fakir is touring his art around Europe. Lifting a man by hooks through his nipples, he explains: "Something is missing, something that society does not provide...so people have invented their own rituals and initiations." But the scene is not for everyone. Anti-materialism is hard work. For a start where do you do your washing? Goncalo takes his home and Miguel, well he goes to the beach every now and then. And ignoring property rights brings trouble. In Spain, for example, we see the police locked into a running battle with squatters. Trying to keep the alternative party alive there's the European rave scene. It's not exactly non-materialistic, since open air raves have become big business, but it's a kind of anarchy. At least it feels like 'normal' youth culture. To the beat of rave and the buzz of the tattoo needle, we offer a slice of daily life for Europe's punctured generation. As the new millennium approaches, perhaps we will feel that the Body Piercers have something to teach us all?
FULL SYNOPSIS
TRANSCRIPT