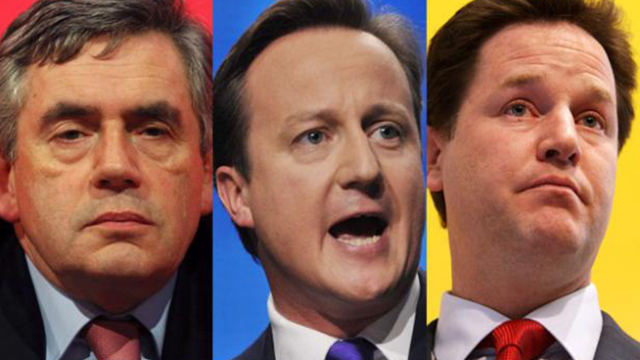 As the election campaign in the UK hots up, we watch as the tired Labour Party limp towards the polling booths with a seemingly revitalised Conservative party readying themselves for 10 Downing Street, after 13 yrs in the political wilderness. But is all as it seems?

Britain's first-ever televised leadership debate saw a surprising overnight development - the opinion polls had the Liberal Democrat leader Nick Clegg, the darkest of dark horses, running down the other 2 from behind! "Now you're going to be told tonight by these two that the only choice you can make is between two old parties who have been running things for years. I'm here to persuade you that there is an alternative", pleaded Clegg. The upshot is that tomorrow's election result is definitely no lay-down misere. It's developed into a genuine 3-horse race, with both the pundits and the public tipping a hung parliament for the first time in 35 yrs. Indeed, you could say that in this suddenly interesting election, very little is political business as usual.
FULL SYNOPSIS
TRANSCRIPT