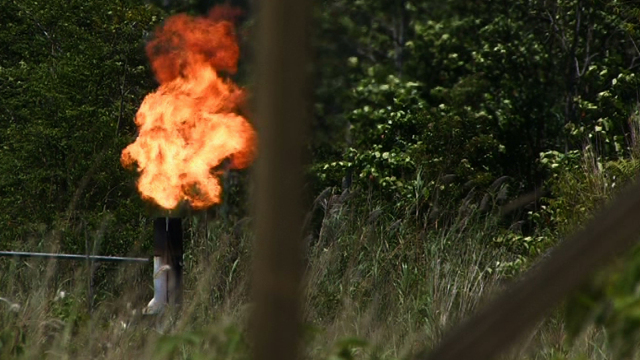 The Prime Minister of Papua New Guinea has made a $16bn deal to extract the country's natural gas. His people have responded with violent protests, which could plunge the troubled nation back into chaos.

"It's just like raping a woman. They're going to rape our resources." The landowners living along the length of the proposed pipeline have been promised huge benefits from the plan to extract gas from the Southern Highlands and export it to Asia. But they don't believe it and are up in arms: in scenes of chaos fuelled by a legacy of watching promised riches pass them by, they cut down power-lines, wielding guns and blocking roads: "You never listen - I'll chop you people". Ironically, most of the people living in the resource-rich Southern Highlands, live without power, without hospitals and without education. The MD of Australian 'Oil-Search'- which has a 29% stake in the project - agreed that the money the government has received in the past, "have not been seen in resource areas". Project Operator Exxon Mobil refused to comment. But the Governor of Gulf Province says he'll sue Exxon for over $2 billion for what he alleges are failings in their environmental impact study. With four dead, the former commander of the PNG Defence Force has confessed to fears that, "we are setting the stage for another Bougainville crisis in the Southern Highlands".
FULL SYNOPSIS
TRANSCRIPT