The Vice Guide to LIBERIA

The Vice guys take us on a trip to the most dangerous place in the world! 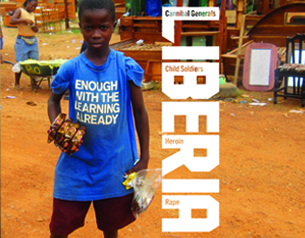 Since 1989 a series of brutal civil wars - primarily fought by murderous drug-addicted, pre-teen orphans - has rendered Liberia one of the most dangerous countries in the world. We've all heard the stories of abject poverty, ubiquitous substance abuse and wanton violence. Now three former mass-murdering warlords show them to us first-hand. This highly accessible documentary is an unforgettable and shocking experience that dives into the hornets' nest.

"Most of my boys would drain the blood from an innocent child and drink it before going into battle". These words from ex-General Butt Naked, famed for stripping off before fighting enemies to the death, welcome us to Liberia. It's a country so ravaged by fourteen years of civil war, that death and destruction bursts out of a primary-colour landscape, and wide-eyed 12 year olds proudly hold a human heart up to the camera: "America's one and only foray into colonialism is keeping a very uneasy peace indeed". West Point is the worst slum in Liberia's capital, Monrovia, and has the smell to prove it. Human excrement is dotted amongst a gigantic rubbish tip, piled high on pure-white sand. What is the government doing? "The commissioner himself sometimes goes to the beach and squats with the people!" What's more, any commerce that comes is usually a cover-up for heroin dens, and billboards paint a culture of rape in pretty colours. A drugged-up twelve year old evokes the desperate need that drives the population to crime: "break teeth, break nose...what else we going to do for money?" There's an enthusiasm for battle here, which exceeds a simple history of violence. Young men grow up with a gun in their hands, desensitized to killing, and young women only know of sex as a means of employment or something forced upon them, seventy percent are said to have been raped. In a dingy brothel where the walls are splattered with blood and dirt, one young girl speaks of how the UN peacekeeping force, instead of protecting and ensuring law and order, "have sex with you, throw you off, and then beat you". There seems to be no end to the suffering of the Liberian people. "When the youth are not satisfied, anything can happen", warns ex-General Rambo. If the UN were to leave, Rambo assures us that the rebels could retake control of Monrovia "within two or three hours". The UN is due to pull out in less than a year, and so the future of Liberia remains uncertain. Will it descend once again into open warfare? Or will the example of Joshua Blahyi, the Christian convert formerly known as Butt Naked, teach others to turn their back on violence?
LEARN MORE.
WATCH MORE.
JOIN THE DISCUSSION.
FULL SYNOPSIS 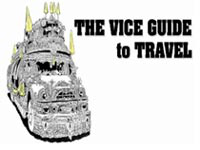 VBS.TV is Vice's broadband television network. The reports, which are produced solely by VICE, reflect a very transparent approach to journalism, where viewers are taken along on every step of the reporting process. 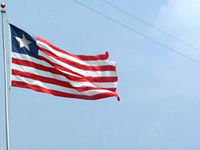 "I was contacted by a journalist there who was originally from Canada. He asked if I wanted any stories from Liberia. He said he could get in touch with people like General Butt Naked, whos now a Christian preacher but used to be a cannibal warlord who killed 20,000 people. I was like: I like the sound of it, but what else? And the more we talked, the more I realised there was so much more to the story of Liberia than just the war is over and the child soldiers with one leg are all happy playing football on the beach as you see in a lot of docs about Liberia and Sierra Leone. Also, the former leader Charles Taylor is in The Hague at the moment facing multiple war crime charges, so it seemed like a good time to go..."