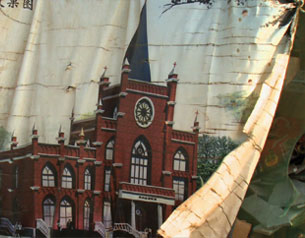 Christianity is sweeping across China. A new tolerance for the religion by the Communist authority, has led to overflowing churches, funded by impoverished believers who'll pay anything for their faith.

"There is a big empty hole in Chinese people's hearts", Pastor Huang sighs. Today, thousands of Chinese people are finding new hope in Christianity. In Kunming, a grandiose church has just been completed, with modern roads to the church still underway. The chairman of the Christianity Patriotic Three-self Committee sees the church as a sign that "China is becoming more like the rest of the world". However funding is required and that often falls to an eager, but economically poor congregation, many contributing more than they can afford. The word is spreading worldwide that Chinese churches need financial aid, hundreds of thousands dollars' worth. But for the time being, prayer, pop music and enthusiasm draw a willing and happy crowd, all feeling enriched by their government-approved spiritual activity.
FULL SYNOPSIS
TRANSCRIPT