This is My Destiny

A searing insight into a nation's addiction. 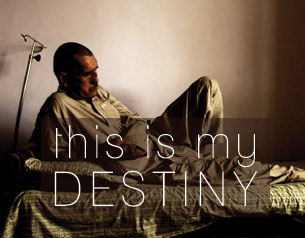 In Afghanistan an epidemic of drug addiction has seeped into every nook of society. This is the story of a place where opium has become so commonplace it is used to calm babies. Where mothers know it is bad for their children but offer it anyway, as the only palliative available.

As an angel-faced baby stumbles excitedly around a humble home, his family laugh adoringly, "See how lively he is!" Throughout his short life, they have been giving Murad opium "so he calms down and rests", and to banish any pains. For this baby born into addiction, recovery seems almost impossible. Yet others with addiction forged in the crucible of poverty and war refuse to accept that there is no hope. "If there is a job...Why choose addiction?" says Ekhtyal, his once handsome face now lopsided thanks to a bullet gone astray.

From a pockmarked Kabul squat to the desiccated northern plains, the oblivion of opium has become the last resort. Mothers across the remote regions of Afghanistan know they shouldn't do it - but when her baby has a stomach-ache, Khoshan gives "her a puff to calm down her pain so she won't die." When challenged she sobs: "There wasn't...There wasn't a doctor." It's a matter of days before Khoshan and her daughter go to the newly opened rehabilitation clinic. But for both mother and baby, the sweats and convulsions of withdrawal are hard to bear. "If only there was opium...my legs wouldn't be aching". With little work and little food, opium also staves off boredom and hunger. As Khoshan agonises, her older child edges in: "the bull and the calf are in the broadbean patch, they've eaten the broadbeans". "What does this innocent baby understand? You made her an opium addict...don't give her opium again", chides the drug clinic's doctor. Yet with little healthcare and an uneducated population, he knows that it's not just the mother's fault. But the clinic does have it's success stories; "I was an opium addict, so was my father, so was my grandfather", says Mahram. Today he is drug free. Khoshan carries her baby out of the clinic and disappears back into an unforgiving landscape, peppered with poppy fields. The subject of this film is tough but the sensitive narrative and the beauty of the photography, somehow manage to bring an element of lightness. 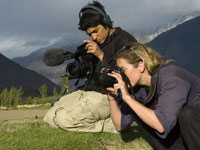 Lucy Gordon originally trained as a print journalist before working in the British TV industry for five years. Between 2007 and 2009 she lived in Afghanistan and worked with a team of Afghan media professionals producing radio, theatre and television for social development with Equal Access.
Bahareh Hosseini is an award-winning documentary-maker. Born in Tehran, she worked as an actress in the acclaimed Iranian film industry, before moving behind the camera. Since then she has shot and directed projects in Afghanistan, Pakistan and across Africa, as well as working for broadcasters in Britain. 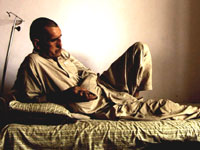 Lucy Gordon: "I initially wrote the proposal with Equal Access to make a documentary-film for Afghan audiences. The addictive qualities of opium and heroin are often not known about, especially within remote and illiterate communities. I found a female production team in order to interview women as well as men, but half way through production it became clear that the subjects of the film could be in danger of their lives if we broadcasted in Afghanistan. So we're using this documentary for international release instead. We in the West have a lot to learn about the difficulties on the ground for populations who have barely known peace-time and where our armies continue to be engaged."