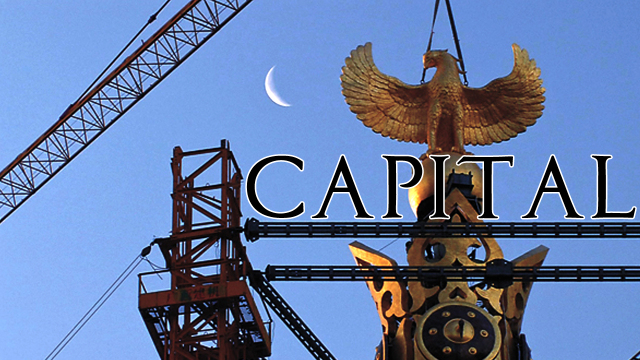 In the run up to the anniversary of Kazakhstan's new capital 'Astana', construction workers race to finish grandiose buildings, a national song is voted on, and bewildered artists are hired in to give the appearance of culture. Yet who can afford to live in this utopia?

"Do we have to wear the 'Astana' t-shirts?", smirks one reporter as the anniversary celebrations kick off. Artists battle with their canvases in the middle of a rainstorm, soldiers perform acrobatics in golden costumes, and the President makes a heartfelt address: "cities don't grow overnight", he says. Yet they were still slotting the bricks of the plaza in place, when the people gathered to watch the hoisting of a gigantic golden bird. "This monument competes with the clouds", they say in awe. It's the icon of a new, modern Kazakhstan, carefully distinguished from the Russian and Nazi eagles of the past.. "Everybody said there was a future in Astana." So they came from Uzbekistan, Kyrgystan, Tajikstan. Yet most of the work they found was in furthering the ideal of 'Astana' itself. In the frantic run-up to the anniversary, labourers proud to serve their country, work in shifts. Sidewalks, monuments, and high-rises appear in days, as quickly as the Lenin statues and the fields disappear. After the construction, it was time for the culture. "We get it Roza, you want us to act like free artists!", the group laugh at a straight-faced council worker. A Eurovision style song contest is held to find the city's anthem. But as the artists say "culture isn't a flowerbed you can just replant". The young, pretty tour guides at the 'Palace of Peace and Concord' - a giant glass monument to a city that is yet to begin - spend most of their time gossiping about the celebrations. "We had one idea, then we needed another", says a photographer who never allows himself to take a bad picture of Kazakhstan, "Patriotism is the new idea." Though they ask "who can afford to live in these beautiful buildings?", and though they appreciate that some of the celebrations are a bit over-the-top, each of these residents is proud to be laying their lives in a city that symbolises a break from a Soviet past. "I might even bring a girl here", says one of the builders, patting the last brick on the city's plaza. A thought-provoking and beautifully filmed insight into Kazakhstan. LEARN MORE.
WATCH MORE.
JOIN THE DISCUSSION. 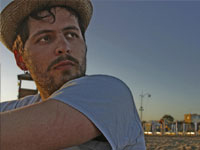 Maxim Pozdorovkin is a director and writer based in Brooklyn, NY. Born in Moscow, he has lived and worked in New York, San Francisco, and Berlin. After studying film at Harvard University, Maxim directed three short films Each and Every Thursday , Not on Route 6, and Miss Mend: A Soviet Vision of America. Maxims next project is a feature length film/collaborative media documentary project on the history of the AK-47 machine gun. Capital is his first feature length film. 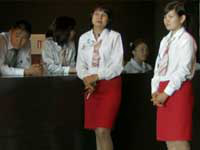 Director Maxim Pozdorovkin - The idea of building a city from scratch is hard to wrap your head around. After all, a city is an organism that gradually evolves from trading post to metropolis. You cant just build one, this wont work, I remember thinking to myself after hearing about President Nazarbayevs decision to build a new capital in the middle of the empty Kazakh steppe. A decade later I was on a train with cinematographer Joe Bender going to make a movie about the tenth anniversary of Astana. For Astanas first generation the building of a new city is inseparable from the building of Kazakh national identity. This film is dedicated to them. Theirs is the story of what happens when human, economic, and cultural capital come together in a dusty village in the steppe.