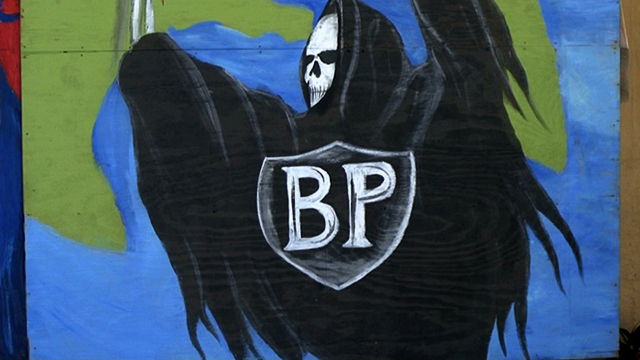 The oil may have stopped pouring into the Gulf of Mexico. Yet the devastation continues as hundreds of people begin to suffer the medical consequences of the toxic dispersant used to clear it up.

Gary Burris was one of the many fishermen who volunteered to clean up his home after the spill. However, what many people don't know is that he and many others were forced to sign a compensation waiver. Renowned environmental scientist Wilma Supra is not only taking BP to court for this compensation waiver but has also collected over 600 medical complaints so far. BP's oil dispersant of choice Corexit 9500 is the most toxic in the market and is banned in the UK. Gary was sprayed by Corexit - "the next day I was burned in the back of my throat", things went from bad to worse "I could not breathe, I couldn't get up". Wilma says the BP compensation fund will not fix these long-term - "What about all the people who are being made sick?" she demands. "This is not something that goes away."
FULL SYNOPSIS
TRANSCRIPT