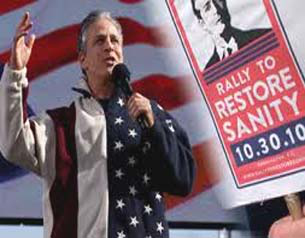 Satirist or serious politician? Will Jon Stewart's "Rally to Restore Sanity" launch him into the political arena? It was supposed to give a voice to the moderates but has Stewart greater ambitions?


"Maybe Jon's making a move into politics here." Jon Stewart's talk show has become a centre-point for those exhausted by the increasingly polarised American political landscape. His influence in the political sphere revolves around biting sarcasm and an ability to see through rhetoric which many Americans find refreshing. The "Rally to Restore Sanity" began as ridicule of the extreme rhetoric of the tea-party movement in the US but those attending seem to regard it less as a political joke and more as a serious political movement. "The country's in a crazy state and I want to do something about it, which is why I'm on this bus." Disillusion with the incumbent political class has increased Stewart's following and at the rally he seems to have become less of a satirist and begun acting like a serious politician; filling the void left by the increasingly polarised Democrats and Republicans. "it's a joke, but the joke is also that it actually matters." Stewart remains coy about his ambitions for the moment but it is increasingly apparent that his voice represents a growing number of Americans.
FULL SYNOPSIS
TRANSCRIPT