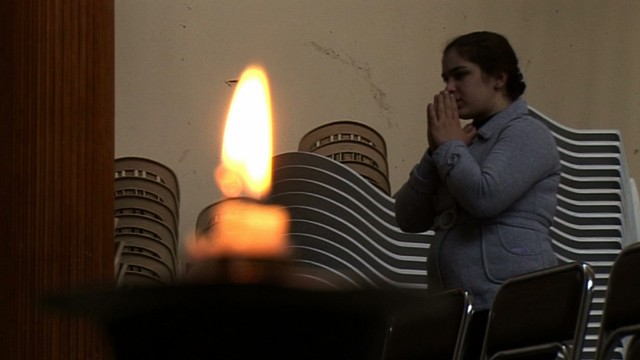 Christians have lived in Iraq for 2,000 years but this Christmas they're not celebrating. Under increasing attack from Islamic fundamentalists are they about to be driven from their ancestral homeland?


Meet Canon Andrew White, an Anglican priest who serves the largest congregation of Christians in Baghdad. His service this Christmas could be the last Christmas service to be held in the country which has some of the oldest Christian communities in the world. "I dont want to leave the country. But now this has happened, I fear for my daughters" says the mother of Uday a four-year-old boy killed by Islamic extremists, unfortunately it was not an isolated attack. In the last few months over 1,000 families have fled Baghdad after Islamic extremists burst into a church in October, murdering two priests and holding the entire congregation hostage. Now few Christians in Iraq will even attend religious ceremonies for fear of violence. "Even though it's Christmas, and we love this festival, what can we do? We are sad at the moment, so we won't celebrate". At the church where the violence occurred a few still come to worship, the walls behind them still stained with bloody hand prints. "They say to us, the Americans are your people, they're Christians. They say you brought them here. And they kill us for it". The American invasion has radicalised many Iraqis and Christians have become identified with the West and are an easy target.
FULL SYNOPSIS
TRANSCRIPT