The Last Elephants in Thailand

Why are Elephants in Thailand under Threat? 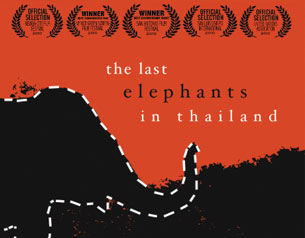 In Thailand, Earth's gentle giants have become the victims of a brutal industry called Elephant Painting. While tourists may love the sight of these elephant artists in action what they fail to see is the shocking cruelty inflicted on the elephants behind the scenes.

A baby elephant reverses but can't get out. The ropes that are rapped around him merely tighten. A man jumps on top of him and hits him repeatedly with a hook. The skin around his trunk is broken and bleeding from the beating and his neck is raw from the tights ropes. "This is how elephants in Thailand are trained", says one Thai veterinarian. However, there is one retreat for the elephants. In the heart of the Thai jungle lies an elephant hospital. "I'm fighting because I'm talking on behalf of the elephants". Sarita who runs the hospital is struggling to save the elephants of Thailand from the cruelty of mahouts and from extinction. It's an unenviable task; the tourism that feeds the cruelty is a huge industry. Elephant painting has even become an internet sensation and was featured in Oprah's magazine O. It's a lack of knowledge that has allowed this to happen, "How many people know that behind that photo the elephant is stabbed?" Unfortunately, despite the efforts of Sarita and others on behalf of the elephants, elephant painting continues to prosper and elephant numbers continue to fall. There seems little hope for the elephants of Thailand. Those who speak out for them are imploring the world to save these magnificent creatures from their torturers. LEARN MORE.
WATCH MORE.
JOIN THE DISCUSSION.
FULL SYNOPSIS