Who are the Rebels? 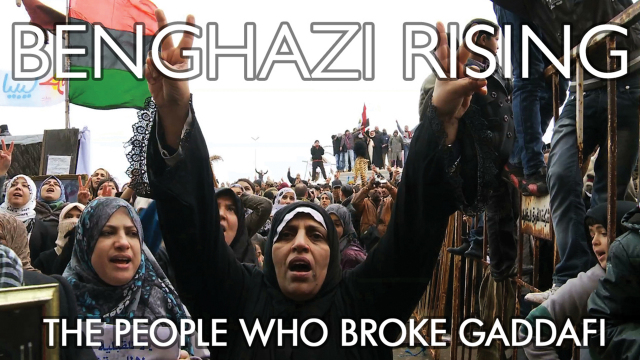 The conflict that erupted in Benghazi on the 15th of February 2011 was as unexpected as it was cataclysmic, but at its heart lay years of hurt and political repression. Through personal stories told by the people of Benghazi, we trace the conflict from its beginnings in a small protest over one lawyers imprisonment, and capture the inspiring story of how the unarmed people of Libya rocked the titanium police state built by Colonel Gaddafi.

In Benghazi's morgue coffin production is never ending. The piles of mangled and blood-stained corpses represent lost children sacrificed to the rebellion. For Libyans it only adds to their determination, "This makes lions out of cats". Standing in front of Benghazi's ruined police barracks a man tells of the suicide bomber who finally turned a small protest into a full rebellion. "He saw the kids being massacred ... he was a decent man with a good salary ... but then ...", words fail. The description being painted is that of the man who ran his car into the Benghazi security headquarters, sacrificing his life to stop Gaddafi's police. "Seeing him sacrifice himself made the masses rise up". The chanting protesters hold aloft pictures of martyrs, not of this conflict but of political prisoners placed in Abu Salim prison since 1996. Police massacred 1200 of them and Benghazi has never forgotten its sons who died that terrible day. It was over justice for these men that the inhabitants of Benghazi first took to the streets. For the first time, fifteen years later they can mourn the casualties of Gaddafi's reign in public. Evocative scenes which speak volumes of the pressures Libyans have lived under for decades. "I have no problems in my life, I have a good job, I go on holidays every year ... But we are not human beings under Gaddafi", a striking rally-cry spoken by a Libyan woman. "It's not a revolution for bread, it is for freedom". Libyan oil has brought her people affluence but not blinded them to their state's brutality and slowly destroyed their fear of the cruel police force Gaddafi relied on to stay in power. It is no coincidence the conflict started in Benghazi, where Gaddafi's police were at their strongest and most brutal. We are brought to the secret police cells where many were taken to be tortured. "They used to torture people who were against Gaddafi here". So when the opportunity to rebel presented itself every man, woman and child joined in fearless resolve. From soup kitchens started by teachers, to Facebook protests organised by young girls. Through stories from the people at the heart of the conflict we see the revolution take shape. Gaddafi continues to create new martyrs for the rebels, but at least for the moment they can finally mourn their dead, killed over decades by the oppressor Gaddafi. LEARN MORE.
WATCH MORE.
JOIN THE DISCUSSION.
Nominated for the Rory Peck Award for Features.
FULL SYNOPSIS 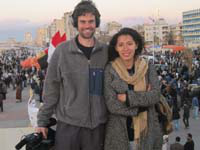 Jihan Hafiz and Reed Lindsay recently quit their jobs as journalists with major television news organizations to chase revolutions and pink skies. Reed had worked mostly from Latin America, in particular Haiti, while Jihan grew up in Egypt and has reported extensively on US foreign policy in the Middle East from Washington, DC, and other parts. They now roam the globe, cameras and laptops in hand, in the hopes of telling stories that are not being told, giving a voice to the voiceless and exposing abuses of power. They are currently living out of their bags somewhere. 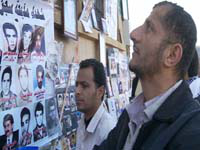 We went to Libya on the heels of covering the Egyptian revolution as freelance journalists. We had heard of terrible repression, but the news reports were sparse. Neither of us knew the first thing about the country beyond its notorious leader Muammar Al-Gaddafi. When we arrived in Benghazi, we were overcome with the intensity and rawness of the Libyan revolution. Even more so than in Egypt, the Libyans had shattered a barrier of fear, which in their case had lasted for more than 40 years. We were so moved by the courage, strength and generosity of the ordinary people leading the Libyan revolution, we felt compelled to try to tell their story.