Tunisia struggles to cope with over 200,000 Libyan refugees 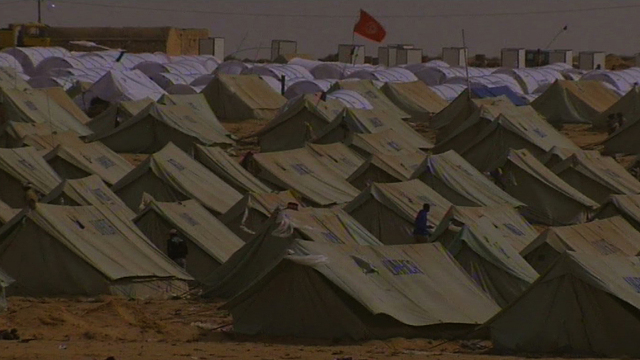 Since the start of Libya's conflict more than 200,000 people have fled the country, over half crossing into neighbouring Tunisia. Arriving in a country suffering its own turmoil, the prospects are grim.


The eerie voice of the man at the centre of the Libyan crisis, Gaddafi, is broadcast on loudspeakers chanting "revolution, revolution", as refugees pour across the border into Tunisia. Those fleeing are afraid to speak freely about the turmoil they are leaving behind as government militias try to keep them away from journalists. "Libya is very good", one man insists. Others are more open: "We paid a neighbour and he helped us to the border but he could not protect us from the soldiers who beat us". The burgeoning refugee crisis created by the conflict in Libya is placing a massive humanitarian burden on Tunisia's already overloaded camps. There are also refugees originally from Somalia, the Sudan and Bangladesh; they had arrived in Libya hoping for asylum, only to find themselves amidst further violence. A Somali politician arrives in the camp to try and persuade his citizens to return to Somalia:"How long are you prepared to wait?", he pleads with the hostile crowd. As the situation in the camp rapidly deteriorates, the choices are looking slim. Produced by SBS Australia
FULL SYNOPSIS
TRANSCRIPT