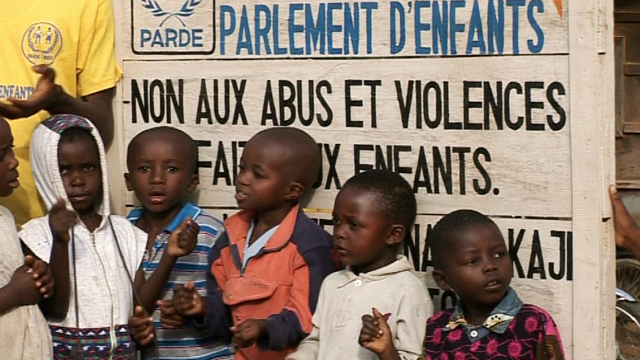 The town of Beni in the DRC is thought to have the highest count of child prostitution per population in the world. Now, a band of enterprising children are trying to protect their fellow sufferers.

In a country ravaged by more than a decade of civil war, many children find themselves victims of abuse, neglect and sexual exploitation. For many youngsters, a life of prostitution is their only choice: "I came here because life is so hard. It is better to come here than to wander the streets," says Tantine, a 12 year old girl living in a brothel. Despite the systemic nature of child abuse, the police are reluctant to make a change: "we can not close the brothels because if we do the children will be on the streets", says one policewoman. With abuse and prostitution on the rise, pioneering youngsters like Eric Mali-sawa have sought to offer hope and salvation though the Children's Parliament - an organisation dedicated to helping children like Tantine. In countries where the structure of society is crumbling and corruption reigns, it's organisations like the Children's Parliament that seem to offer the only hope.
Produced by Sam Farmar
FULL SYNOPSIS
TRANSCRIPT