The world's oldest culture under threat from mining 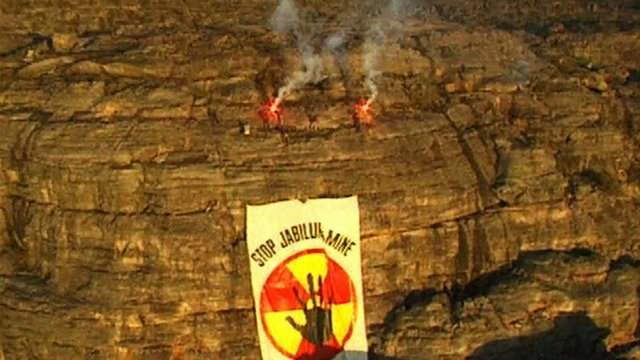 Stunning footage of a threatened land reinforces the sadness felt for what could be lost if the Jabiluka mine project destroys a World heritage site. A 52 minute version is also available - please enquire at sales@journeyman.tv for details.

The lure of Uranium has proved irresistible to successive Australian governments and Australia's Environment Minister has dismissed the Mirrar people's objections to the Jabiluka mine. This lucrative project could sever the Mirrar people's spiritual links with the earth and the sights of sacred significance throughout the valley. "I was born in the bush"; Yvonne Margarula tells us, "sleeping on the ground with the fire". Twice Academy Award nominated director, David Bradbury, explores the effects of this cultural devastation on the lives of a people and a land inextricably joined. Rare archive footage shows how Yvonne's father and his people were bullied into giving their legal consent to a lease over Jabiluka. The traditional landowners were encouraged to consider not just their own wishes but that of Australian progress as a whole. But they thought they were negotiating for a land claim, not another uranium mine. Yvonne's father Toby was weakened by stress and spent most of the fateful meeting lying down. His sigh, "I'm tired now, I can't fight any more", was taken as all the consent needed for the mine to go ahead. He received a silver plated pen for his trouble. Today, Yvonne continues his struggle. The issue of land rights is clearer to her: "We know we own the country." But the question remains, what are land rights worth when the Mirrar people are powerless to stop the destruction of cultural tradition? They have gained little from the development of their country, despite promises from the mining company. They receive 4.2% of gross sales from another mine, Ranger, but bureaucracy eats up most of that budget and basic services are conspicuously lacking. Today, Aborigines suffer from rampant alcoholism, a symptom of powerlessness. They receive an annual payment of $400 as a royalty for the lease for the Jabiluka mine, but now they want to give that money back to the mining company and to annul the old agreement. If Jabiluka goes ahead, it will be below the floodplain in a tropical wetland, and the fear is that radioactive deposits may be carried far with the rains. The land is a World Heritage sight, attracting 300,000 tourists a year. The Jabiluka mine project has been condemned by scientists and environmentalists, yet Energy Resources asserts that the risks of radiation are "absolutely negligible". "We do not add any radiation to what's already there naturally", he adds. But contaminated water supplies may be causing birth defects in Aboriginal children. Environmentalists are also concerned that the tailings will remain active for the next 250,000 years, and that mining increases the chances of stable uranium moving. It is the first of 26 Uranium mines awaiting government approval. Stunning footage of this threatened land reinforces the sadness felt for what could be lost. Now other Australians are supporting the Aborigines in what many see as standing up to what mounts up to an outright swindle of their land. Yvonne Margarula's fear grows more acute: "Money's not going to fix anything. They can take it back. White man money, not black fella money. Money's going to kill us." Protesters struggle to hang a banner on the proposed mine site. As the helicopter lifts away, the hilltop banner makes a poignant image. In the struggle to protest in a language that will reach the white people, maybe the Aborigine voice will finally be heard. Produced by Frontline Films
FULL SYNOPSIS
TRANSCRIPT