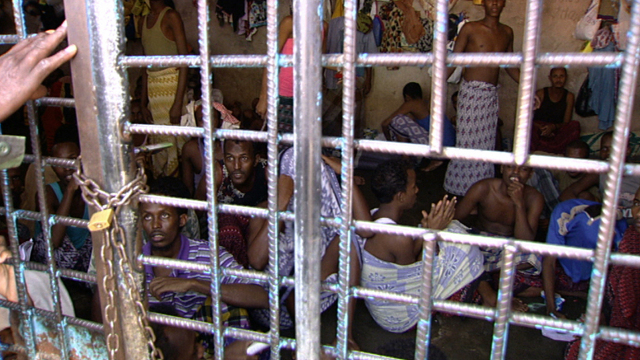 As Somali piracy refuses to go away, why does the international community seem powerless to stop it? Starving and desperate Somali fishermen are starting to suggest that maybe they don't want to.

"If they were serious about tackling piracy they would have solved it ages ago", says the Somali coastguard. While they watch enormous international naval vessels patrol the high seas, they can't even afford to take their single vessel out of the harbour. For them it is obvious: the Western ships have reasons other than pirates for wanting to patrol these waters. A predominance of large warships that seem unsuited to the fight against piracy seem to support their claims. "These vessels are enormous; we have small maneuverable boats, we can get away fast", one pirate tells us. Problems with piracy started here when Somali fishermen hijacked foreign trawlers that were fishing in Somali waters without permits. Then, as now, European naval vessels protected these illegal trawlers, which practically cleaned out local waters of fish. "We're afraid of only one thing. Something much worse than cannons and bullets: hunger". Have Somali seas become an international playground for self-serving Western navies - testing arms, protecting illegal fishery or just polishing up their international image?
FULL SYNOPSIS
TRANSCRIPT