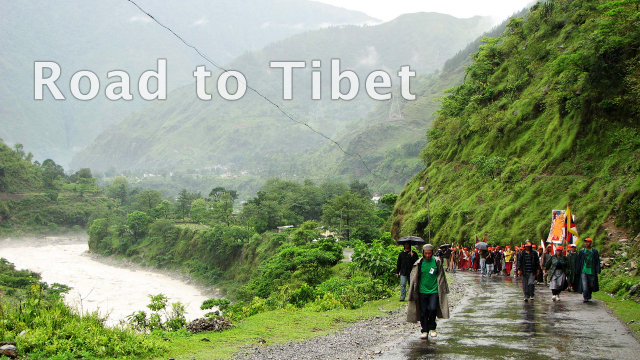 Tibetan temples, traditions, religion, culture and art evoke a lost world in Dharamsala, India. And yet, Tibet lives in the hearts and souls of all exiles. Their most cherished dream is to return home.

In 1959, the people of Tibet rose against the occupying Chinese Liberation Army in a spontaneous uprising on the 10th March. Later that year, Tibet's spiritual leader, the Dalai Lama, fled to India along with a hundred thousand Tibetans. On the 10th March 2008, on Uprising Day, a group of exiled Tibetans began a march back to Tibet. "I experienced so much suffering in Tibet. I also lived in a Chinese prison for almost 4 years," says one Tibetan monk. "My body was 39 kilos. More than 100,000 Tibetan people were killed." It is imperative, he believes, to speak out: "If we are very quiet, that's what the Chinese government needs. We must do something!" A group of Tibetan refugees contemplate the road before them - a hard 6-month long trek from Northern India to the outskirts of their homeland, Tibet, is what lies in store. Many of those committed to returning have never actually seen the land they consider their home, having been born in India to parents who were forced to leave Tibet decades ago. We witness both the epic journey and the obstacles that the protestors meet along the way. We witness the strength of the people as they link arms and use passive resistance when faced with the Indian authorities, this being at the heart of their Buddhist code. As Tenzin Tsundue, poet and political activist, states: "People will take non-violent action to bring freedom to Tibet." 01:33 - Dharamsala, Tibetan exile capital
06:40 - Dalai Lama
11:00 - Marchers being journey to Tibet
14:10 - Tibetan theatre performance
22:30 - Tibetan Parliament-in-exile, Dharamsala
24:18 - Buddhist temple
26:00 - Indian police
35:33 - Tibetan protestors
35:45 - Burning Chinese flag
36:00 - Dalai Lama
37:00 - Chinese Embassy demonstration, Katmandu, Nepal 2008
42:29 - Gandhi memorial, Pajghat
50:57 - Dharchula border

Manfred Manera was born in Venice in 1966 has been working as an independent journalist since the late eighties for Italian and International press and magazines. Since 2005 he was one of the first member of the London Frontlineclub championing independent journalism. He worked for Italian channel LA7 and Austrian tv Orf2. In 2006 he produced a documentary on Gipsy architecture with the title "the Indians of Europe", which was presented at the Venice Biennale. Since 2007 he runs the Venetian Multiversal Academy an n.g.o based in Vienna with the aim of promoting biodiversity in human activities.

"Road To Tibet" started as a project on Tibetan theatre which, carried away by the 2008 events, the uprising in Tibet, became a real "road movie", a documentary focusing on the tibetan freedom struggle. It was shown at festivals in Vienna "This human world"(2008), Amsterdam "Himalayan Film festival" (2009), Assisi "Flower Film Festival" 2010 and Rome "Tibet Film Festival" 2010.