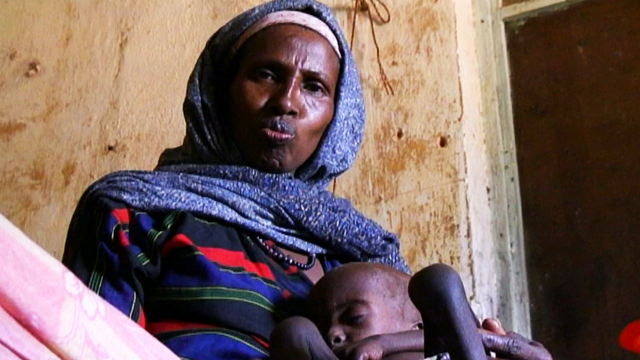 In this report we bring you the first al-Shabaab interview with a Western news organisation since the UN declared famine in Somalia. They claim there is no crisis, but shocking images tell the real story.

"Although we've saved many lives, 4,5 or 6 children die every day", says Doctor Abdalla Bulle. This is the result of a political deadlock, which has meant that aid is only trickling into an area hit by the worst drought in 60 years. Many aid agencies have pulled out of al-Shabaab areas and international donors are unwilling to rush in money, fearing it will end up in the hands of militants. Al-Shabaab deny they are hindering the aid effort: "we have only refused those who were doing more harm than good, and those with political agendas", a spokesman tells us. Indeed, on the ground aid workers seem more concerned with a lack of foreign aid than with AS interference. "There is no fear that aid agency funds are going to al-Shabaab. It's not humane that we can't access funds because of this fear", Hassan from Islamic Relief says. They, like other aid agencies here, maintain that they fully control the distribution of their aid. Some refugees say the group is controlling their movements, but there remains little evidence of corruption. To stop the disaster a full-scale rescue effort is needed, but while the argument over access goes on, the people's long wait continues.
FULL SYNOPSIS
TRANSCRIPT