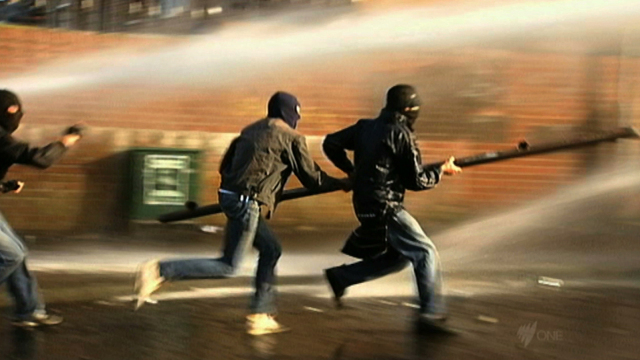 When the Good Friday Agreement was signed 13 years ago, there were finally hopes for peace after years of violence. But a new upsurge in violence has many worried about the return of hard-core nationalism.

Northern Ireland had been relatively calm since the Good Friday Agreement gave the Irish republican movement a share of power. But a new generation of Irish Republicans are emerging, who feel they've been sold out by the IRA and Sinn Fein's involvement in the peace agreement. There's been a recent surge in sectarian attacks, especially on the streets of Belfast, where barbed wire barricades still divide the two communities. "They really don't know what to do about it because Sinn Fein can't do anything other than say 'do as we say not as we did'", says Robin Wilson, a writer. The police service is now on high alert for more killings as new recruits take up the dissident cause. "These young lads have never been through it before, they carry more guts, they'll do whatever they have to do", says Thomas Campbell a long time resident of the nationalist district, Ardoyne. For Dr Martyn Frampton, a terrorist specialist, the future looks increasingly uncertain: "dissidents seem to have the capacity and a drive to operate, to carry out acts of serious violence which I don't anticipate to diminish seriously in the immediate future."
FULL SYNOPSIS
TRANSCRIPT