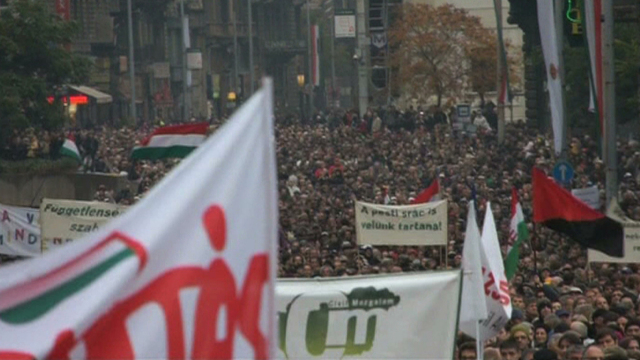 First protesters accuse the government of tyranny, now they have taken to the streets to support the embattled PM. This report explores the constitutional changes that have driven Budapest into chaos.


In April 2010, Viktor Orban's Fidesz party swept to power, elected on a promise of stability, security and a strengthened economy. However, the party's enormous two-thirds parliamentary majority granted them vast legislative power and the ability to unilaterally effect changes to law and the constitution. Since then, they have been accused of over-reaching their democratic mandate - Prime Minister Orban re-wrote the constitution following the elections and it is now coming into legal effect. As political Scientist Laszlo Lengyel describes in stark terms: "If all Orban's plans are realised a new system will be created that will not have a single constitutional counterweight". Secretary of State for Foreign Affairs Gergely Prohle defends the democratic status of the Fidesz Party, claiming, "The impression our government gives is deceptive, because the system we have is different to the rest of Europe". However, amidst fundamental constitutional change, tough austerity measures, and new media laws curtailing political discussion, the Fidesz Party's claims of democratic legitimacy are not entirely convincing - "No one will venture out into the open. No one will revolt against Viktor Orban".
FULL SYNOPSIS
TRANSCRIPT