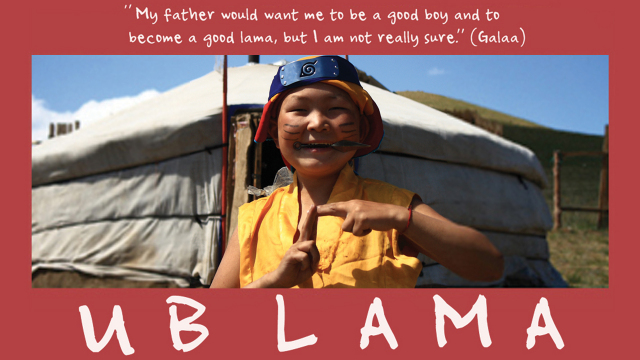 12-year-old Galaa likes hip-hop and computer games. But he lives in a small yurt on the outskirts of Ulaanbaatar. After his father's death he deals on the local black market to support his family until, caught between modernity and tradition, aspirations and poverty, he decides to become a Lama. Can the monks help this unruly, troubled boy to be a breadwinner? A touching and intimate glimpse into life in Mongolia today, painted with the lightest of strokes.

Panting through the cold, folded hills of Mongolia, is the lone figure of young Galaa. His father dead in a tragic accident, a mother who looks twice her age, he yearns for a better life. Like any youngster Galaa is drawn to wrestling, rap, junk food and online dating. Yet he does exude an urge to help others, to "protect them from pain" and the quiet ways of Buddhism may save him. The tension between old and new, godly and worldy, are embodied in this child. In the marketplace Galaa is an adept wheeler dealer. He shrugs off the indifference of other traders to turn a quick buck. Yet he wants to honour his father's memory and be the best he can be for his mother. At a special remembrance service for his father an ugly fight breaks out as Galaa tries to siphon off some rice to save for others. Galaa's anguish rises painfully to the surface. "Just join the monastery" beseeches his mother quietly. Galaa visits Pethub, one of the most disciplined Buddhist monasteries in Mongolia, to try and gain acceptance. Scrubbing him in ice-cold water in preparation for the trip, his "buttocks turned to Buddha", the new sense of purpose is clear. "When you become a lama the grief and pain of poverty will disappear." So speaks his mother with a wisdom and simplicity that typifies this special film. Galaa adores the trappings of Buddhism, "the drums, bells and sutra books, the belt, the robe... the bag...I like them all!" He enjoys prostrating himself, it keeps him warm. Being here is the fruit of good actions in previous lives" a lama tells him, and urges him towards patience and study. Galaa wraps himself in the mantle of religion, but outside the monastery he continues to flit between two worlds, dressed in red robes and huge trainers, studying religious texts by candlelight and hip-hop dancing on the hills. When denied a place in one monastery Galaa's disappointment turns to disillusion. "Lamas tell lies!" he laments bitterly. As his dream founders, he makes the best of his "cute lama" image and prays for money in the market. Perhaps this boy can find his way in the outside world, without denying himself the earthly pleasures of a wife and family... A close character-led portrait of growing up in a world of utter poverty, painted with the lightest of strokes, and very much in keeping with the quiet sincerity of Buddhist values. 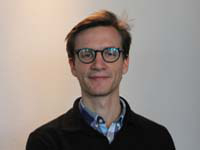 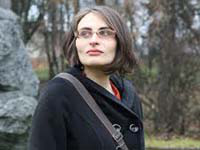 Egle Vertelyte is a Lithuanian screenwriter and director. After finishing history in Vilnius University she attended European Film College in Denmark, where she has made her first short films. After finishing her studies, she came back to Lithuania where she worked with Studio Nominum helping to develop various media projects. During that time she has also directed a TV broadcast 25th frame on Lithuanian National Television. In 2009 Egle moved to Mongolia, where she worked as an assistant at National Mongolian University for the lecture of visual anthropology, did a volunteering job at several non- governmental organizations and filmed UB LAMA. At the moment Egle studies on the MA in Screenwriting at National Film and Television School in the UK and works for a daily newspaper Respublika as a special correspondent. 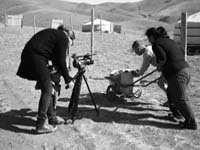 Egle Vertelyte lived in Mongolia for over a year. She became interested in Mongolian Buddhism and started to work as a volunteer teacher for young lamas or monks at the Pethub monastery in Ulaanbaatar. There she met a boy Galbatrakh, who tried to enter the monastery.

Galaa seemed like a very interesting and complex character and Egle spontaneously started to film his journey. After a while Egle visited boy's family in Bayankhushuu yurt district and began to film at their yurt. Galaa, his little brother Turuu and mother Byambaa accepted her into their lives. She would go there almost everyday, prepare food, bring water and make fire with them. Boys taught her Mongolian language and protected her from wild dogs.

Later Egle found out that Galaa earns for living while selling cigarettes in a black market. Filming there seemed dangerous for a foreign female, so Mongolian assistants helped Egle to shoot this material. Tsetsentsolmon Baatarnaran who is anthropologist - musicologist at National Mongolian University helped Egle to translate and interpret the footage. Egle filmed Galaas family around half a year within a span of May of 2009 until October of 2010. She had nearly 100 hours of material.