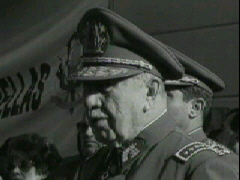 The arrest of General Pinochet exposed the frightening hatreds between the political left and right in Chile. While the left reminded the world of Pinochet’s horrific crimes, the right demanded that the horrors be put in their proper context. These were not atrocities, the argument runs, but excesses—what hard men do to restore order and economic success in a harsh environment. A solid third of the Chilean people still support a man the world reviles.

Evelyn Matthei is a right-wing senator. She does not condone the crimes, but believes this generation cannot understand the hatred of those times. There was unrest, labour shortages, food queues. The army coup led by Pinochet was not without Chilean support. For the political left the problems of Allende's government were a symptom of cold war destabilisation tactics. Juan Letelier's father was Allende's foreign minister. He died in a car bomb attack in the heart of Washington-allegedly at the hand of the CIA. Chile's history is a very different story for him. "I think one has to get the story very straight: they created destabilisation. Let's remember that the day after the coup, all the supermarkets were full of food." In a Santiago theatre the emotional power-play of torture and disappearances finds expression. But their outlet in Chilean politics is stifled. Pinochet may not be in power anymore, but he certainly made sure his legacy would last. He changed the electoral rules so that the right had a stranglehold on the constitution. And though the democracy is flawed, its economy is the healthiest in South America, another side of the Pinochet legacy. Prosperity has sweetened memories.The right has built memorials to the disappeared. Move on says the right. Don't look back. Build a country for our children to play. But even if they should, can they stifle the anger of Pinochet's victims? Now a left wing parliamentarian, Juan Pablo Letelier uses public hearings to remind modern Chile of the horrors. The stories are harrowing listening. "I have never been able to tell exactly what is more painful - to hear a human being tortured for hours on end, or to be tortured oneself. I can say to you that I can't tell the difference", says one woman. Elean lost her three sons to the regime. "They are resting now. God has them in heaven ... and when Pinochet dies, let the devil have him and burn him for being evil." 20 years ago Fernando Mathei was Commander in Chief of the Chilean Air Force and General Pinochet's right hand man. Yes, he concedes, excesses occurred; but now (as then) there is no need to apologise - it was the regime's duty to protect the country. Produced by ABC Australia
FULL SYNOPSIS
TRANSCRIPT