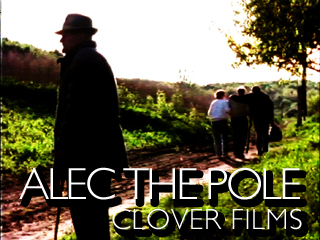 After the Second World War, a foreign soldier appears in a remote village in the Scottish Highlands. The only clue to his provenance is a Polish army badge on his ragged sleeve. The man, who calls himself "Alec", is something of an anomaly in Grantown-on-Spey, where chins wag at the slightest deviation from normality. Almost fifty years on, and "Alec the Pole" is normality personified - a pillar of the community, with a family and his own construction firm. He chops firewood, plants potatoes and has acquired a broad Scots accent. But newly-laid roots are easily dug up: after forty-six years of silence, Alec can keep his secrets no longer. Confessing that he is really a Ukrainian national, who survived the Red Army occupation before serving in the German army, then deserting to fight for Poland, he now sets out with his daughter Val on a journey of rediscovery.

A few months later, twenty-seven Ukrainians - their faces pale with anxious expectation - are crowding out a station platform. They're waiting for the night train from Moscow, where father and daughter sit, nervously sipping tea with lemon. When the two parties converge, Alec is violently welcomed back into the family he left in shame, who had presumed him killed long ago. His sisters - now ancient ladies in headscarves - shed tears at the miraculous resurrection of their "baby brother", and empty their larders to serve the biggest feast Alec has ever seen: the last time he was here, there was nothing to eat but nettles. In the shell which once was their home, he collapses on the floor where he used to bring scraps of orphanage bread to feed his starving mother. Though Alec's name was inscribed on a war memorial, she never believed he was dead. So completely has he escaped his roots that he can no longer speak his mother tongue - but with the help of a "wee droppie" of whisky, he reconnects with his relatives. Yet, after the initial waves of joy, it's clear that Alec and his family are irretrievably lost to one another. The celebratory atmosphere is impossible to sustain, and there is an audible sigh of relief on both sides when Alec and Val decide to cut short their visit. "What are you going to do now?" she asks her father. "Try to forget," he sighs. But she reminds him: "You tried to forget for fifty years, and look - it hasn't gone away." Intensely moving, Alec the Pole is emotional observation of the power of the past, and the disturbances created when its ghosts are reawakened.
FULL SYNOPSIS