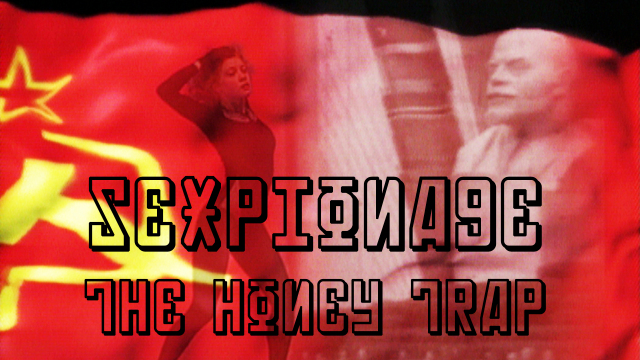 A story of love, despair and manipulation; a gigantic struggle between East and West in which the pawns were young women forced by the KGB to seduce secrets from foreign military, businessmen and diplomats to satisfy its insatiable desire for information.

Natacha still remembers when she saw her first foreigner: it was in the late 1980s, and she had been drawn to the look of freedom she saw in their eyes. A few days after she met Hiroki, a young future diplomat, she received a call from the KGB. Scared that she'd be imprisoned or sent back to the country, she followed their instructions. Natacha told her new boyfriend that her Uncle Boris had left her the key to his flat while he was away for a few months. Rigged with wires and cameras, this flat would be used to spy on the young couple's most intimate moments. Unlike the many women who actively volunteer to be 'swallows' - young, beautiful women proud to serve the motherland in sexual entrapment operations - Natacha still feels guilty. "I couldn't stay human", she says. Hiroki did not seem to blame Natacha when the time came for him to meet Uncle Boris, although she does to this day. After he had gone to meet the KGB in their room at the National Hotel, she never heard from him again. All signs of him were erased from the flat, and when she rang Boris in desperation, she was told he had returned to Tokyo. She knows nothing of his fate, and still cries when she thinks of him, and how she betrayed him. "I broke his career, and maybe his life, because he really loved me". Natacha's burgeoning love affair would have been of particular interest to the KGB. Having mastered the fine art of 'recruiting' diplomats and foreign officials, they have long been able to classify potential targets according to their national temperament. According to their dossiers, the Japanese are more introverted as a race, and more difficult to manipulate. "The Italian national character brings many opportunities: they are very open, very passionate, they can be easily provoked". With a veritable arsenal of tactics for using women to obtain highly sensitive information, the KGB's 'honeytrap' operations have been running smoothly since time immemorial. One former agent even says the tradition goes as far back as the beginning of creation, with Eve's seduction of Adam. "Theoretically, it is morally wrong. But in life, that is life. As I have told you, when you are in intelligence there are no rules to hold you". With compellingly candid interviews with agents, officials, experts and the manipulated women and men themselves; this chilling, but strangely touching documentary offers a unique perspective on the ruthless manoeuvrings of the KGB, and the broken lives they have left behind.
FULL SYNOPSIS