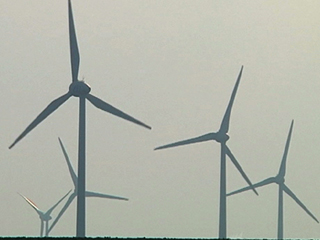 In villages across Germany the people have seized power by generating enough renewable energy to supply their needs. But with the government cutting subsidies to small producers will this green revolution run out of steam?

Following the Chernobyl disaster a community around Schönau in the Black Forest decided to buy their local plant and turn it into a co-operative. Now the villagers power themselves with solar or wind energy and then sell the excess to the national grid. "We started because we wanted to help, but then it became ecoomically interesting for all those who invested." After the Fukishima incident, Chancellor Merkel pledged to close the country's nuclear reactors and naturally, this boosted interest in the Schönau scheme. However, the government recently announced a 30% reduction in subsidies to small energy producers, stifling similar green communities across the country. "The phasing out of nuclear energy cannot be achieved without subsidising renewable energy". As anger amongst environmental activists swells, has the influence of large energy companies again infected national politics?
FULL SYNOPSIS
TRANSCRIPT