The Politics Of Football 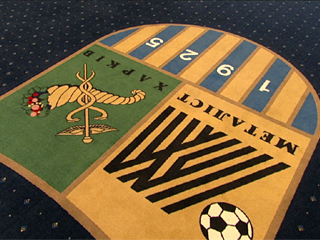 With the 2012 UEFA European Championship upon us, Ukraine finds itself in the world's spotlight. But with its poor human rights record and widespread corruption should it be co-hosting the event?

Football fans travelling to Kharkov will probably not notice much but the Ukraine, sometimes referred to as 'the Wild East', is a country where power lies in the hands of the super rich. Critical journalism is silenced and people are routinely tortured by police. Ten minutes from the stadium political prisoner, Julia Tymoshenko, is on hunger strike, with fresh charges being prepared against her. "The prosecutor could take a blank piece of paper and write on it that she killed Kennedy and she would be convicted for it". Roman Zabzaliuk, a member of Tymoshenko's opposition party, went undercover to prove a network of bribery and blackmail at the heart of government. Yet despite his evidence, he says that "everyone is silent". UEFA boss Platini has refused to comment on the political maelstrom, but others argue, "even in football there are basic values. They should speak up if the country hosting has no fairness and doesn't follow the rules."
FULL SYNOPSIS
TRANSCRIPT