Sofex: The Business of War 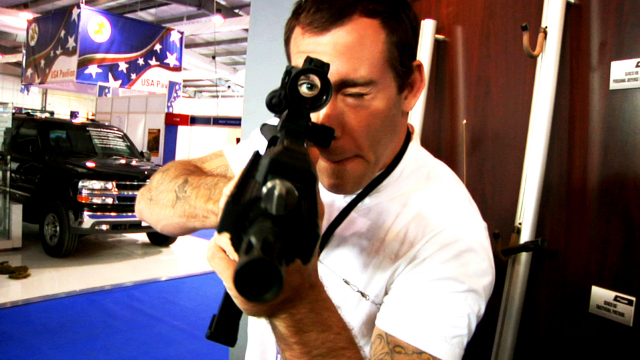 Worldwide, battles are raging between governments and rebels, drug cartels and gangs. But where do all the weapons come from? In this report the frightening reality of the international arms trade comes to light.

Walking through the huge complex in the middle of the Jordanian desert, you could be at a car sales show. Flashy posters advertise new models and eager salesman compete for attention: but they are selling deadly weapons. Just outside the hall filled with endless stalls selling M16s and Javelin rockets, they've even got a training centre where you can go and try them all out. "For a state, it's easy. For a terrorist or a criminal organization it's more difficult", a defense industry journalist explains. Over the week more than 12,000 attendees visit this brainchild of King Abdullah II, whose biggest sponsor is the USA."It's weird. Everybody's real cordial with each other. But at the end of the day, we're buying weapons to destroy each other with", a US marine says.
FULL SYNOPSIS
TRANSCRIPT