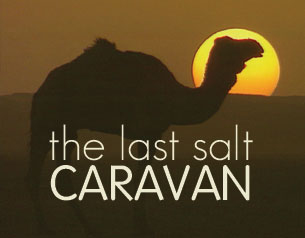 Timbuktu in Mali - city of legends, and still a centre for the salt trade. Salt comes from Taoudenni, a desolate place 700km away in the north. From here, it has been carried by camel for centuries. This wind-swept, sun-drenched film follows the ancient salt caravan across the desert.

Mali in north-west Africa. Once ruled by a mighty dynasty and one of Africa's wealthiest countries. Today it's one of the world's poorest. In the Middle Ages Timbuktu flourished in trade and culture. A kilo of salt was worth a kilo of gold. The trade still exists; despite the harsh conditions young people are signing up to become caravan drivers. Work is scarce. The Persian word "caravan" means protection of trade, and larger caravans were more secure. The nomadic Tuareg have traditionally chosen this trade. Ali, is a Tuareg, a desert Nomad. Shrouded in blue tunic and scarf to avoid inhaling the desert, he prepares his caravan of camels for the journey to the bleak salt mines of Taoudenni. Ali knows the desert well - travelling this route for many years. During the day he navigates by the sand ripples and the form of the dunes. At night the stars point the way. This is an unearthly world. But Ali's heart is heavy - his family is still in a refugee camp in neighbouring Mauritania, victims of Mali's civil war. Shortly outside Timbuktu we cross a caravan laden with salt blocks, which has just made it back after 40 days' walk. Skeletons of animals which fell along the way are witness to the often deadly price of crossing the desert. At a nomad camp Mahamud tells us 'I love the way we live. Things were only hard during the civil war. They took my goats and camels and simply slaughtered them'. And then at last, the first water well. Camels can live for 2 weeks without water, and a thirsty animal can drink over one hundred litres in one go. Stories are exchanged over green tea. And the caravans continue to pass... Before the civil war tourists who were fascinated by the nomad culture of the desert used to come here. Ali spent 4 years as a desert guide showing them his way of life. But in 1990 the civil war changed all that. This godforsaken Place was forsaken by even the tourists. Left to live out a harsh life in quiet solitude. The war started when the Tuareg rebelled against the government. They wanted to win autonomy but the army hit back mercilessly. Only last year did all groups agree on peace. For five years, the entire north of Mali and almost half of the country was an impassable war zone. The 80'000 refugees have slowly been trickling back since 1996. They are no longer nomads, they want to settle. At the salt mines life is even harder. 6'000 years ago this was a huge lake from the river Niger. The salt is a remnant of that time. Miners hack painful blocks of salt from the earth. Poor quality slabs are carved from the first layers. Beneath lies the salt that is highly prized. Every layer has a name. First comes 'the white', then 'the daughter', 'the top beauty' and then 'the beautiful'. The working conditions are inhuman. Salt eats into the skin in sun which burns without mercy. For three long months Baba will quarry salt here. His home is made of salt. It keeps neither wind nor cold out at night. Increasingly, black men - descendants of the former slaves of the Tuareg - do the hard work. 'Salt workers often die here. We don't have medicine and the water is salty. We must buy drinking water every day' says Baba. Camels, are by far the most highly performing beasts of burden. We get to know them as never before. They are great source of comfort to their fellow beasts of burden: man. Their dung provides fuel for cooking and their milk sustenance. Each morning, the cranky creatures rise with the sun and stretch and moan as their front legs are unbound. Each night they moan even louder as their legs are bound up to stop up them running away. The dextrous traders bridle the animals with care, avoiding their foul yellow teeth. Once linked together, the camel train resign themselves to their fate. As do the desert nomads. Produced by Marion Mayor-Hohdahl
FULL SYNOPSIS
TRANSCRIPT