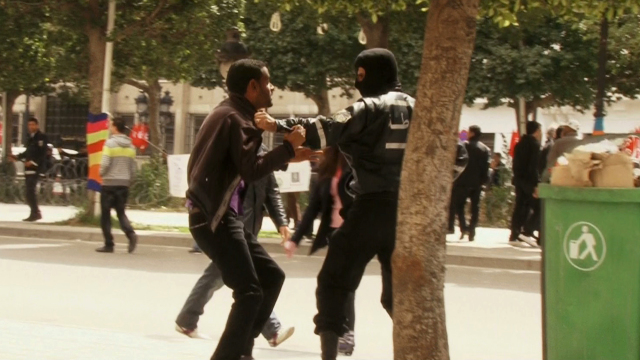 In Tunisia, birthplace of the Arab Spring, violence has returned to the streets. This report examines the deep-seated problems that are pushing their inexperienced Islamist government to breaking point.

Three policemen drag a young man through the street by his neck, jabbing him with a truncheon as he walks. A father helps his young son to wipe the tear gas from his eyes. Newly-emboldened extremists have rioted across the country in protest at alcohol sales after Ennahdha, the ruling party inspired by Egypt's Muslim Brotherhood, decided not to include Sharia Law in the new constitution. "The new government speaks, but nothing changes!", one woman in the street shouts. Even those who support a more moderate government have been on strike over unemployment. In the interior of the country hundreds of new jobs are opening up, but accusations of corruption and nepotism abound as thousands upon thousands apply. When asked how much has changed since the revolution, the young, disappointed men reply, "Nothing. Nothing." As Tunisian journalist Fahem Boukados points out, "It's not only about families who steal, but the development model that concentrates the investment in the tourist zones." The coalition's answer to the unrest is to preach patience with an economy that needs time to re-establish itself. But besides financial woes, it seems that on both sides of the divide, the Islamist government is losing the fight for the heart of the new Tunisia.
FULL SYNOPSIS
TRANSCRIPT