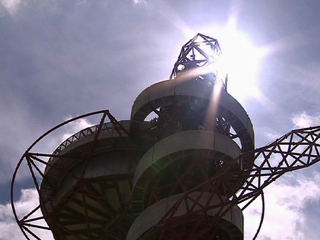 In the run up to the Olympics, this powerful report took a look at the sharply contrasting views of Londoners prior to the opening ceremony, speaking to residents from the Olympic site's neighbouring estate who are being forced from their homes as a result of the games.

"How can I be part of something that's going to take my home?" asks a tearful Mary Finch. It's a question that's been on the lips of many residents being forced to move as a result of plans to regenerate the area and one that doesn't have an easy answer. An elderly resident of the Carpenters Estate, Mary has lived there for 40 years and is understandably heartbroken by the prospect of losing her home. It's a stark contrast to the optimistic outlook shared by many Londoners who view the Olympics as a boost for the city, but while the games actively promote a spirit of inclusively, the reality for some couldn't be more different. 01:00:05 - Busy London streets
01:00:53 - Diamond Jubilee procession along the Mall, planes flying over, the Queen smiling
0101:03 - Evening Diamond Jubilee celebrations at Buckingham Palace, fireworks
01:01:11 - Olympic park Stratford, volunteers
01:01:45 - Troops working at Olympic Games security
01:02:02 - Protest against Cuts - officer hits protestor
01:02:33 - Police protest
01:04:01 - Huge billboard advert on tower block
01:06:10 - Council estate in front of Olympic Park
FULL SYNOPSIS
TRANSCRIPT