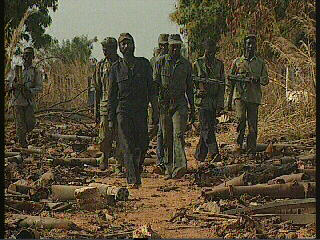 The war in Guinea-Bissau was short, violent and often waged on the civilian population. Frontline footage bears witness to the destruction...bodies strewn across a muddy battlefield, tanks harassing civilians.

Disenfranchised soldiers are still roaming the country. These men are loose cannons who will not renounce their hatred for President Nino Vieira. It all started on the 9 June 1998, with what seemed like a confinable military uprising. The army were demanding better salaries and better pensions for the war veterans that gave the nation its independence. They were also siding with the army's chief, who was sacked for allegedly smuggling arms to Senegal - an offence it now seems was committed by the President himself. The breakaways were a vicious fighting force, fuelled by vengeance for their treatment at the hands of Vieria. Captain Bubo fought from the age of 14 in the independence war. He was arrested and jailed for 5 years: a victim he says of Nino's hatred for the Balanta ethnic group. Major Lassana, also a Balanta and a veteran was imprisoned and tortured by Vieira: "I was hit by batons, received electric shocks...Nino is a savage." They are still out for revenge. The rebels say they only ever wanted talks, and that Vieira didn't give them the chance. Whatever the truth the resulting fight was nasty and prolonged. Today the President is still part of the new government, but his trial threatens to topple it. Produced by SIC TV
FULL SYNOPSIS
TRANSCRIPT