The Thawing of a Cold War Warrior 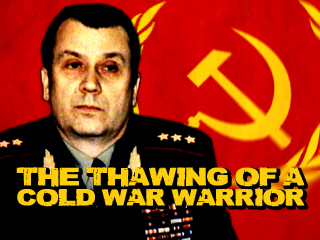 Amidst the deepening tensions of the Cold War comes an enthralling story of love and betrayal under Soviet Party rule. Ivan Yershov, a Red Army General and a father, was rising through the higher echelons of the Soviet military when he was confronted with a decision that would turn his world upside down: sacrifice his high-ranking position in the military elite or lose his only daughter.

Originally from a peasant family, Ivan Yershov rose through the ranks to become one of the Soviet Union's most important military leaders. The Cold War was the making of his career and he played a pivotal role in the Soviet invasion of Czechoslovakia. But his comfortable life in the military was turned upside down when his daughter Tatiana fell in love and married her private tutor, Edward Lozansky, a Jewish Russian dissident. They had a happy first year of marriage, but the harmony was short lived. Pressure from the state forced the General to trick Edward to move to America where Tatiana was supposed to meet him. But General Yershov betrayed his daughter and refused to sign the papers she needed to emigrate. Little did he know, Tatiana was ready to fight "with the Soviet state, with the Soviet army and with her father." Divorced and isolated, she went on hunger strike and, after 31 days, was on the verge of death. Despite the media and political maelstrom that followed, it was a phone call from her desperate husband 5000 miles away in America that would finally bring the General to his senses. After six years apart, an agreement was finally made for Tatiana to leave Russia, but in doing so the mighty General's career was irrevocably destroyed. "The General didn't realise that as soon as he showed his weakness he lost all his power", Edward recalls. Completely ostracised from the military world he devoted his life to, and seeing his daughter's personal and political struggle, the General opened his eyes to the injustices of the past and the true nature of the Soviet rule. "Interfering in the unity of a family violates all human rights", he says solemnly. Compelled by the wrongdoing of his country, he travels to Czechoslovakia and meets Alexander Dubček, to seek forgiveness for his role in the invasion so many years ago. Finding some peace with the world, the Cold War warrior finally thaws and reconciles not only his role in the military but also his beloved family. "I realised that I needed my own personal perestroika." LEARN MORE.
JOIN THE DISCUSSION.
FULL SYNOPSIS