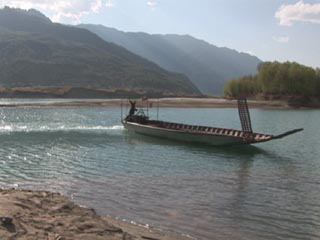 As China begins to fragment, this front-line investigative journey along the Yangtze finds out why rebellions are breaking out in both the cities and rural areas and how new laws are threatening to undermine the civil movements' peaceful attempts to raise environmental awareness and support human rights.

China's economic rise may have brought improved living standards and soaring GDP rates, but many are still suffering. "In China, farmers don't own the right to their land. They only have the right to use their land. Everything belongs to the government," explains campaigner and academic Dai Qing. Farmers have been forced to relocate, making way for dams required to meet growing energy demands. Fishermen have been rendered jobless - their fish stocks depleted by pollution. Local environmentalists meanwhile have been imprisoned for questioning the government's policy. Progress, it seems, has come at a cost and as corruption seeps in among the growing power of provincial officials the development of an equal society is under threat. "When you sacrifice one side to satisfy the other then you don't have a peaceful society," explains Ding Wenxiu, a villager being threatened with relocation. "We should be equally treated in the face of the law, but we are not." The days of direct action, reminiscent of Tiananmen '89, are all but over, but the mass-persuasion mindset remains strong.
FULL SYNOPSIS
TRANSCRIPT