In The Grip of the Generals 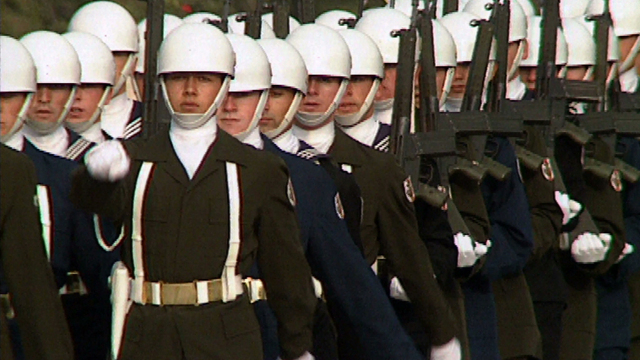 With almost 800 000 men and 70 000 officers the Turkish army is the second largest in NATO. This powerful force asserts itself in all spheres of Turkish life. We join them at the annual celebrations of the founding of the Turkish republic.

The cheerful men in uniform, singing fatherland songs are the most powerful men in Turkey. Their bullish actions have deposed the elected government four times in recent decades. It''s the army''s position on the Kurds that has recently brought them into focus. They have never budged on their consensus that the Kurds do not have a separate identity. Visting a base in the heart of a Kurdish settlement the army have brashly erected an banner with an Ataturk quote: "How wonderful it is to say 'I am a Turk'" it reads. For 15 years they have sent thousands of troops in to fight the PKK. It was their decison to draw out the war as proof of their own indispensability. Ataturk defined the Army's role thus; "It has to be one of the basic principles of the republic that the army stays clear of everyday politics." Turkey is still an agonizingly long way from this position. Produced by ZDF
FULL SYNOPSIS
TRANSCRIPT