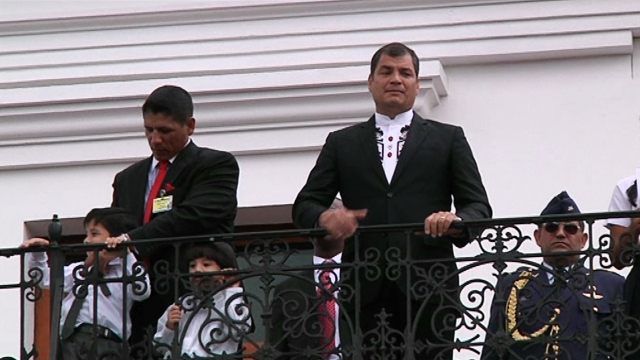 As Julian Assange remains holed up in their embassy, Ecuador appears to be doing everything they can to protect him. But back in Ecuador, journalists just like Assange continue to be persecuted by their leader.

Aliaksandr Barankov - the man dubbed Ecuador's other Julian Assange - was a financial crimes investigator in Belarus and, like Assange, says he uncovered government secrets that put him in danger. He thought he was safe when Ecuador granted him asylum, but was later arrested by police and spent 84 days in a Quito jail."I'm still scared for my life", he says. A charismatic and popular president, Correa basks in public support, but he's gone to war with the country's media and is seen as anything but a supporter of free speech. "If Mr Assange was Ecuadorian he would be in prison by now", says Cesar Ricaurte, the director of Fundamedios, an independent organisation monitoring media freedom in the country. "Freedom of speech in Ecuador is becoming the worst in Latin America", he insists. So if Assange ever does make it to his unlikely choice of sanctuary, what will await him there?
FULL SYNOPSIS
TRANSCRIPT