Israel is more stuck than ever in South Lebanon 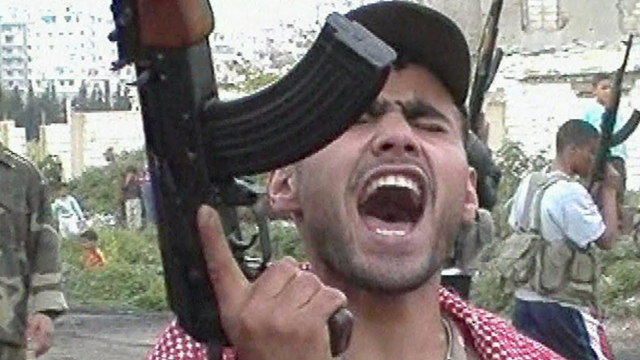 A new generation of Palestinian die-hards are training in Lebanon's refugee camps in preparation for confrontation with Israel.

Inside the training camp of the hard-line '13th September Group' a commander hardens up a group of freshly armed teenage recruits by firing at their feet. Later there are lessons on using Katyusha rockets. Abu Khaled, chief of another radical Palestinian group, explains how he co-ordinates attacks with Hezbollah. Recognizing the popularity of resistance, the Amal movement, a rival Shia Muslim group to Hezbollah, has also resumed it's attacks against Israel. Watching the Amal fighters fire on an Israeli position, it is clear they are well trained and well armed. The attacks now come in quick succession, aimed not at beating the Israelis back, but at weakening morale. "Of course we will win this guerrilla war," says one Hezbollah fighter, "we are in the right. The Israelis are occupying our land - we are not occupying theirs." For a regional analyst, these coordinated attacks are the first sign that the guerrilla war in Lebanon may intensify if Israel refuses to first satisfy Syria on the issue of the Golan Heights. Given the presence of these guerrilla fighters, any Israeli withdrawal from south Lebanon without a prior agreement with the Syrians on the Golan Heights would be deemed unilateral and premature, exposing Israel's northern border to continued guerrilla attacks. The reality could be that Israel is more stuck than ever in south Lebanon. Includes rare interviews with Hassan Nasralla, Secretary-General of Hezbollah and Mounir Maqdah, Commander of 13th September group. Produced by ME TV
FULL SYNOPSIS
TRANSCRIPT