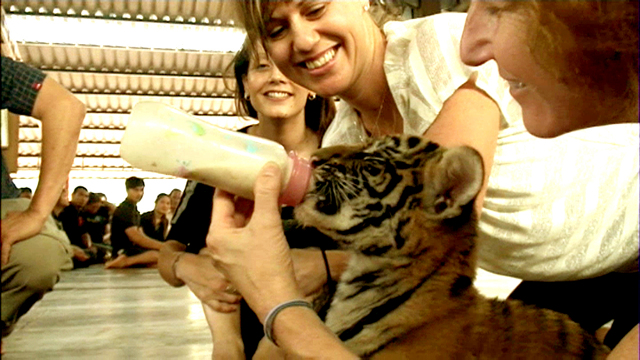 The Tiger Temple is one of Thailand's most popular tourist destinations. It portrays itself as a sanctuary for rescued tigers, but activists argue it is a money-making venture where tigers are abused and illegally traded.

"They're all being kept there for entertainment, and nothing else", says animal sanctuary worker, Edwin Wiek, who argues that the Tiger Temple has no conservational value. Activist Sybelle Foxcroft went undercover at the temple. She described it as "probably one of the most horrific things I've ever seen". She also claims to have witnessed the temple engaging in the illegal wildlife trade. Despite the allegations, the temple continues to operate.
FULL SYNOPSIS
TRANSCRIPT