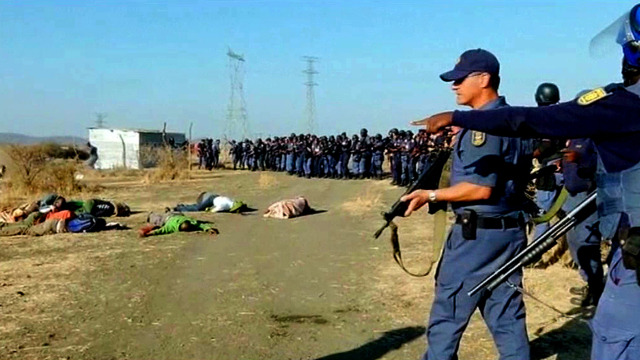 As the Marikana commission gets underway, this shocking report shows footage that undermines claims the police acted in self-defence. With miners also reporting police intimidation, are they attempting a cover-up?

"The police kicked in the door and came inside the shack", Bhele Dlunga, one of the Marikana miners, tells us. What happened next was straight out of an apartheid-era police handbook: he was forced to the ground, handcuffed and suffocated with a plastic bag for 15 minutes. Sibonele Sebopha is one of the few strike leaders who hasn't been arrested in the lead up to the commission. He says intimidation of miners sharply escalated as the hearings drew closer. Mobile phone footage shot by police, that wasn't available in the aftermath of the incident, also undermines claims the police acted in self-defence and suggests why they're putting pressure on the miners to keep quiet. In the distance an unarmed youth approaches, as a group of heavily armed police look on. "Don't shoot him, don't shoot him" one officer calls, but gunfire rings out. "That mother fucker, I shot him ten times", the policeman who shot him boasts. Combined with reports of execution-style shootings shortly after the incident in September and evidence from the scene that suggests police were shooting from an elevated position, a very different picture to the one presented by the police emerges.
FULL SYNOPSIS
TRANSCRIPT