When a City Falls 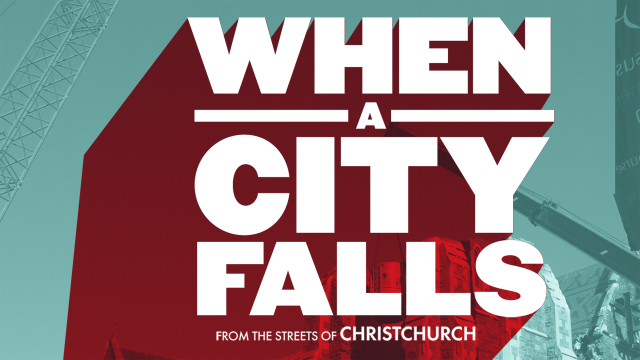 The city shakes, walls tumble, frightened residents cower as the dust flies. The earthquakes that rocked Christchurch, New Zealand in 2010 and 2011 ripped the city apart. Born in the heart of the action, this film documents the destruction of a beautiful city and captures the inspirational will of the residents to recover and rebuild. Travelling beyond reactive television footage it's a magnificent chronicle that will still be watched decades from now.

"We had earthquake strengthening done in 1999 and that's what saved this building. Thank God and the Christchurch city council that they had the wisdom to earthquake strengthen like they have. This place is the icon of the city," the priest at Christchurch Cathedral explains in the aftermath of the September 4th earthquake in 2010. They say lightning doesn't strike twice and after a magnitude 7.1 quake resulted in no casualties, it looked like Christchurch had dodged the bullet. But on February 22nd 2011 as shocks rumble through the city, people run back and forth in absolute chaos. It's almost impossible to see through the dust, but just visible through the clearing tumult is the crumbling facade of Christchurch cathedral. Less than a year later and the church lies in ruins. In the centre of the city people are reeling from the shock and devastation. The injured and the bereaved stumble back and forth in a daze, while others run and shriek, unable to tell which direction represents safety. "I gotta get to the kids, I gotta get to the kids", one woman tells us. The human devastation rendered by the unexpected second quake is terrible. "We couldn't get back in because of the army. We understand they're doing they're job, but when your Mum's trapped under a whole load of rubble, you just want to get as close as you can," one man says through tears. Time and again we push beyond the red tape to the heart of what's going on. Coming off the back of gut-wrenching interview after interview the camera is shaking, the emotion overawing: "It's just like the city is gone eh. The buildings I used to go into and know so well. And here's the basilica, oh my God [sob]". The beautiful monument is reduced to rubble. But out of this dark day, the resilience and off-beat strength of a community is revealed. "All I've got to wear is suits at the moment, but I like it...we're the only ones directing traffic here now," a smiling young man sitting by the road laughs. At a local hall, people come to share food and water and help each other recover from the crisis. "Anyone you see with more than you might anticipate that they'd need, a question or two reveals they're feeding a whole street. They're the able-bodied ones helping those who can't leave their houses."And through the disaster the people of Christchurch and Canterbury display a determined effort to bring life back to normal. "Our bell is no longer being heard at the moment, but let me tell you it will ring again over our village, waking you bloody lot up!" the Mayor of Lylleton says, the humour crackling through his speech epitomising the New Zealander's fiery response to the disaster. Beautifully scored and atmospherically shot, this film captures an incredible and striking portrait of the stoicism of a people and their ability to pull through. "People grapple to find reasons and there aren't any. We live on this planet and this is the planet doing what it does." LEARN MORE.
WATCH MORE.
JOIN THE DISCUSSION. 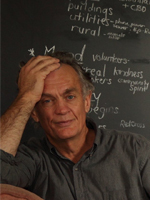 Gerard Smyth: Historically my personal interest in Christchurch runs pretty deep. Of Irish ancestry, my family has lived in The South Island of New Zealand for over 150 years. Telling tales of Christchurch and beyond has been my world for over 40 years. Documentaries, probably somewhere near one hundred, have been shot in many lands. Tales have mostly been about those whose lives and dreams are found in the margins. 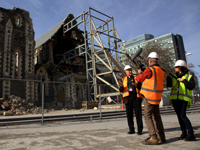 Why, we shall never know, but our central city production office stayed intact throughout the 12,000 earthquakes, whist all around us, buildings were falling. Much of the filming took place in my street.

In the months after the worst quake, we found ourselves inside the 'red zone'-only residents were granted access. Constantly we found ourselves inventing new ways of sneaking crew members into our editing offices. And when the offices shook, we all braced ourselves, took action to make ourselves safe, and then continued with our work.

The film's production has been an extraordinary team effort. The days after the second earthquake were not an obvious time to come together to continue making a movie. Researcher Rhys died in the CTV building collapse. Producer Alice had lost her house. Editor Richard was grieving the loss of 16 work mates in the CTV building. Director Gerard's mum and sister had both lost their homes.

Support came from expat Cantabrians. Christchurch and the wider Canterbury Plains look stunning-albeit so often with the cruel beauty afforded by the earthquake. That's mostly the work of ex local Jake Bryant.

Gerard often found himself filming without permission. He worked without media-passes, preferring instead to take off on his bicycle, recording an unmediated street level people's point of view.