The fallout of the Kosovo expulsion 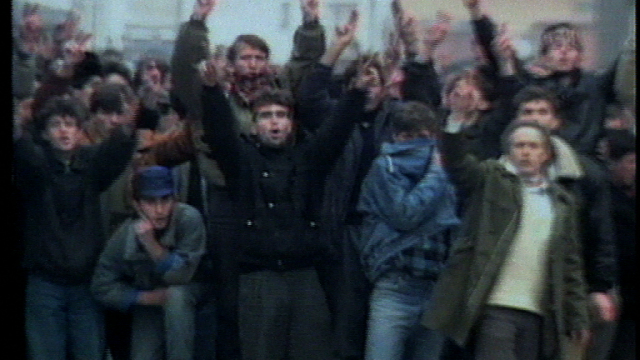 With brutal military precision and crude propaganda, Yugoslav President Milosevic emptied the province of Kosovo. This film asks, will the refugees ever be able to return?

On the Macedonian border thousands of refugees tell their stories of their brutal treatment at the hands of the Serbs. Christopher Hill, criticises Milosevic’s ‘Medieval approach’ to Kosovo. For him, there is no question that NATO are right, Serb ethnic cleansing was and is unacceptable. The problem of what to do next is a tougher call. Military strategists analyse NATO’s options. Macedonian President Gligorov and Chief Justice of the International War Crimes Tribunal, Louise Arbour, discuss the evidence required to indict Milosevic. But defeating him is only one goal. Stability in the Balkans exceed ambitions to topple a dictator. The next battle will be to determine the region’s shape. The Americans want greater unity and fewer borders. But it’s perhaps an impossible reality. Gazmend speaks for many refugees: “I couldn’t live with the Serbs again. How could I after they’ve killed my family.” The outcome of this war may well be an ethnically pure Kosovo, the creation of a new state in Europe and the re-drawing of the frontiers, precisely what nobody wanted. Produced by ABC Australia
FULL SYNOPSIS
TRANSCRIPT